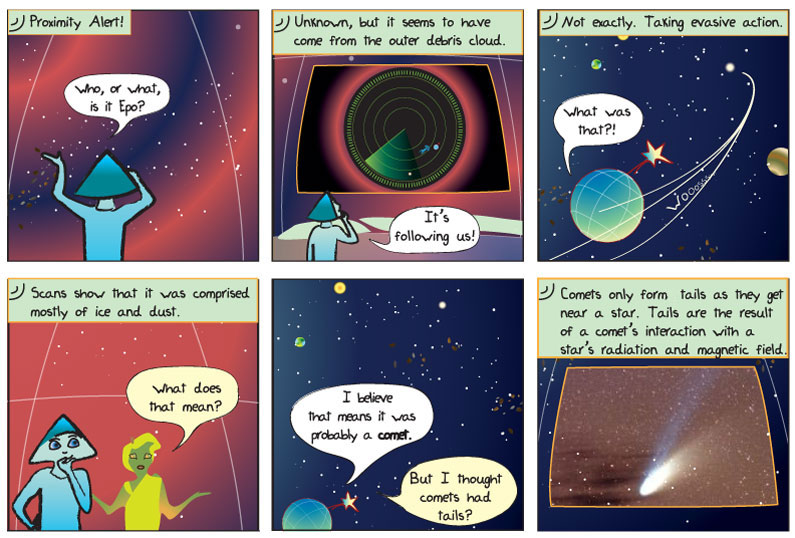 Panel 1.
Epo: Proximity alert!
Alkina: Who, or what is it Epo?

Panel 2.
Epo: Unknown, but it seems to have come from the outer debris cloud.
Alkina: It’s following us!

Panel 3.
Epo: Not exactly. Taking evasive action.
Alkina: What was that!?

Panel 4.
Epo: Scans show that it was comprised mostly of ice and dust.
Granddaughter: What does that mean?

Panel 5.
Alkina: I believe that means it was probably a comet.
Grandaughter: But I thought comets had tails.

Panel 6.
Epo: Comets only from tails as they get near a star. Tails are the result of a comet’s interaction with a star’s radiation and magnetic field.

Comets – are dusty bodies of ice that orbit a star. We typically imagine comets with their characteristic tails, but the tails only form when their orbits bring them close to a star. Comets have three distinct tails: one caused by dust pushed out by radiation pressure from the star, the ion tail caused by solar winds melting the frozen ice and gas and pushing it back, and a tail of sodium escaping from the dust. The sodium tail is not visible to the naked eye. These tails point in slightly different directions but always away from the star.

Tails of Wonder! – Online interactive in which you help the Stardust spacecraft capture comet dust and bring it back to Earth! Also available in Spanish.

Deep Impact – a NASA Discovery Mission, is the first space mission to probe beneath the surface of a comet and reveal the secrets of its interior.

NASA’s Stardust Mission – in 2006 this spacecraft brought back the world’s first particles from a comet.