Panel 1.
Granddaughter: It looks like planets travel in circular orbits.
Alkina: Well, not exactly, they actually travel in ellipses.

Panel 2.
Alkina: A circle is a very specific kind of ellipse, and the orbits of these planets are very close to being circular.

Panel 3.
Alkina: Sometimes objects like asteroids and even some planets can have orbits that aren’t very circular at all.

Panel 4.
Alkina: Of course, there is more to planetary orbits than just that…
Granddaughter: Like what?

Panel 5.
Epo: Objects also travel faster as they get closer to the stars they orbit

Panel 6.
Epo: And their distance from the star is related to how long it takes them to complete an orbit.

Ellipse – is a closed shape with two focal points such that the sum of the distances from the edge to the points is constant. 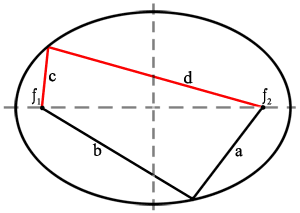 Orbit – is the path followed by a moon, planet or artificial satellite as it travels around another body in space.

There are certain rules that govern the orbits of planets and other objects in the solar system. These rules were first expressed by Johannes Kepler, a German mathematician and astronomer. These rules are known as Kepler’s Laws of Planetary Motion and state:

The period (time) that Earth takes to go around the Sun is about 365 days or 1 year. For Jupiter, which is farther away (about 5 times the average distance of Earth to the Sun), the period is 11.86 years. Check out the video in the multimedia section below to see these laws in action.

Johannes Kepler: His Life, His Laws and Times – Kepler’s biography.