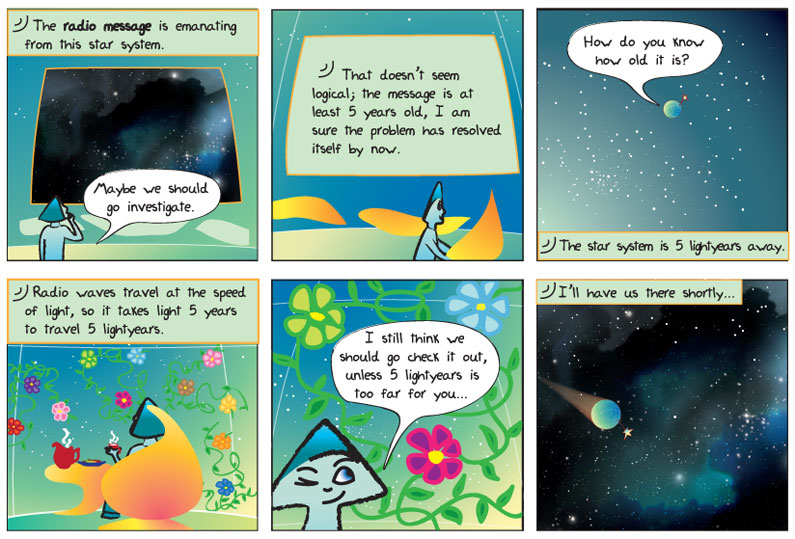 Panel 1.
Epo: The radio message is emanating from this star system
Alkina: Maybe we should go investigate.

Panel 2.
Epo: That doesn’t seem logical; the message is at least 4 years old, I am sure the problem has resolved itself by now.

Panel 3.
Alkina: How do you know how old it is?

Panel 4.
Epo: Radio waves travel at the speed of light, so it takes light 5 years to travel 5 lightyears.

Panel 5.
Alkina: I still think we should go check it out unless 5 lightyears is too far for you…

Panel 6.
Epo: I’ll have us there shortly…

Radio – is the name given to the lowest energy region of the electromagnetic spectrum, which also contains gamma rays, visible light, microwaves, and other regions you may be familiar with.

Radio waves were first predicted by Scottish physicist James Clerk Maxwell in 1864. Later, Italian Engineer Guglielmo Marconi developed a device that used radio waves for communicating over great distances. Today radio waves can be used to transmit information across the room, or to send signals into the furthest reaches of space.

One of the uses for radio waves might be to help us find other intelligent civilizations. An organization called the Search for Extra Terrestrial Intelligence (SETI) Institute has been scanning the sky looking for radio waves which might indicate the existence of other life in the universe.