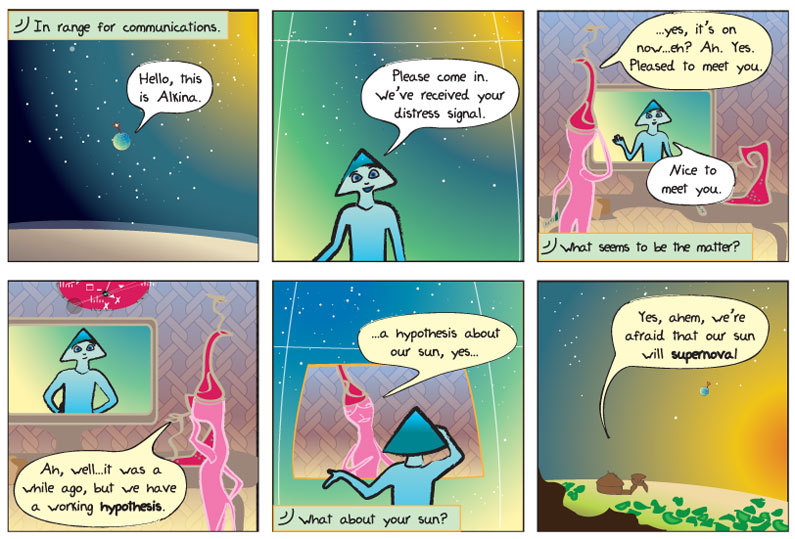 Panel 1.
Epo: In range for communications.
Alkina: Hello, this is Alkina.

Panel 3.
Professor: …Yes, it’s on now…eh? Ah. Yes. Pleased to meet you.
Alkina: Nice to meet you.
Epo: What seems to be the matter?

Panel 4.
Professor: Ah, well…it was a while ago, but we have a working hypothesis.

Panel 5.
Professor: …a hypothesis about our sun, yes…
Epo: What about your sun?

The key steps of the scientific method are:

Next you make your hypothesis, your educated guess, by thinking back to all the things you remember leaving in the refrigerator and deciding on which is the best candidate for the awful smell. Thinking about the hamburger you left half eaten in the fridge from two nights ago and guessing that’s the cause, you now start testing your hypothesis. You pull the hamburger from the back of the fridge and smell it, but it doesn’t seem to smell the same as the foul stench you first encountered.

Just to make sure, you test it again, this time by grabbing your brother and making him take a whiff. Since neither of you smell anything terrible from the hamburger, you can rule out the hamburger as the source. By testing the hamburger, with noses as the tools, you determine that your hypothesis is false.

You now start making new hypotheses, until you find the source of the stench. In this case it was the two month old open milk carton and the now solid contents within. Now that you have made a hypothesis and found the source, you can make more hypotheses and tests; like how long does it take for milk to smell bad? Does 2% milk smell worse that skim milk? And so on. In doing this you then come up with a working theory, like “The Theory of Smelly Refrigerators.”

Science Buddies – Examples on how to write your own hypothesis.