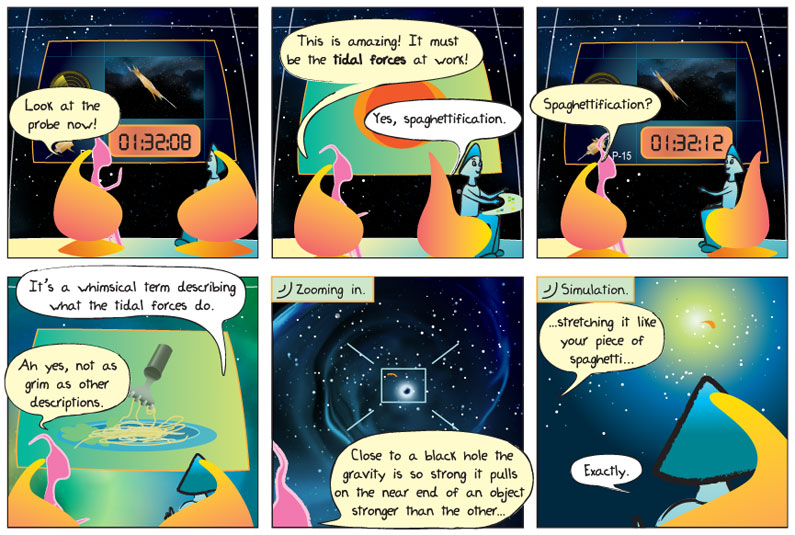 Panel 2.
Professor Ahmix: This is amazing! It must be the tidal forces at work!
Alkina: Yeah, spaghettification.

Panel 4.
Alkina: It’s a whimsical term describing what the tidal forces do.
Professor Ahmix: Ah yes, not as grim as other descriptions.

Panel 5.
Epo: Zooming in.
Professor Ahmix: Close to a black hole gravity is so strong it pulls on the near end of an object stronger than the other…

Tidal Force – the net force that results when the gravitational pull on one side of an object is greater than that on the other side.

When two objects are separated by a distance that is much greater than the size of either object, the gravitational force from one object acts on the center of mass of the other object (and vice versa). This means we can consider the whole object to be pulled by a uniform force, which will not distort the object. However, when two objects are very close together, the pull of gravity on closer parts of an object might be noticeably different than the forces experienced by parts of the same object that are more distant. This is because the gravitational force is inversely proportional to (the square of the) distance, and when the separation distances are comparable to the sizes of the objects, small differences in distance can cause the gravitational pulls to differ significantly. In the case of Moon’s gravitational pull on Earth’s oceans, this results in a tidal “bulge” that causes sea levels (and the solid surface, to a smaller extent) to rise following the moon. In the case of black holes, this can cause the extreme distortion of the shapes of objects near the Event Horizon. This distortion is sometimes referred to as “spaghettification.”

Interestingly, the use of the word “spaghettification” was intended to describe in a human-speak kind of way, how powerful a black hole’s tidal forces are without resorting to graphic details about how those forces would tear and pull things apart. The famous physicist, Dr. Stephen Hawking, was the source of the inspiration for this term. In his 1988 book A Brief History of Time – From the Big Bang to Black Holes, he writes “Gravity gets weaker the farther you are from the [forming black hole], so the gravitational force on our intrepid [imagined] astronaut’s feet would always be greater than the force on his head. This difference in forces would stretch our astronaut out like spaghetti or tear him apart…”