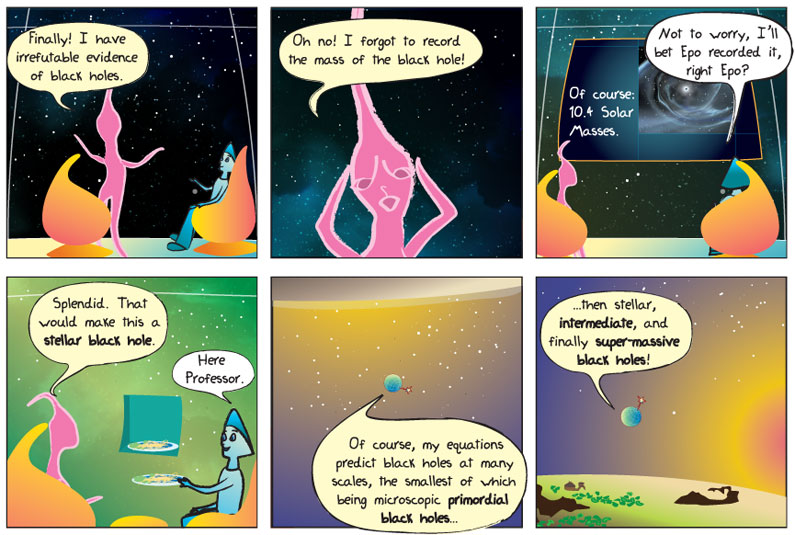 Panel 2.
Professor Ahmix: Oh no! I forgot to record the mass of the black hole!

Panel 5.
Professor Ahmix: Of course, my equations predict black holes at many scales, the smallest of which being microscopic primordial black holes…

Primordial – Very tiny, theoretical black holes that may have formed during the Big Bang. Originally predicted by Prof. Stephen Hawking, these types of black holes have very short lifetimes and have not yet been detected.

Stellar – Black hole formed from collapse of a dying star with a mass at least three times that of our Sun. Scientists have observed more than a dozen stellar black holes in our Milky Way galaxy, and have also detected them in other galaxies that are nearby.

Intermediate – Black hole with mass on the order of tens or hundreds of solar masses that are typically observed near, but not at, the centers of distant galaxies.

Supermassive – Black hole with mass on the order of millions or billions of solar masses. There is scientific evidence for a 4-million solar mass supermassive black hole at the center of our Milky Way galaxy, as well as much larger black holes at the cores of distant galaxies.

Black holes can vary widely in size and mass, but what they all have in common is an event horizon, a boundary beyond which any matter or electromagnetic radiation (such as visible light or radio signals), that crosses it, becomes forever trapped by the black hole. As such, we cannot ever know what goes on inside a black hole since no information can be retrieved from it.

Ask an Astrophysicist: Black Holes – Questions about black holes answered by an astrophysicist.