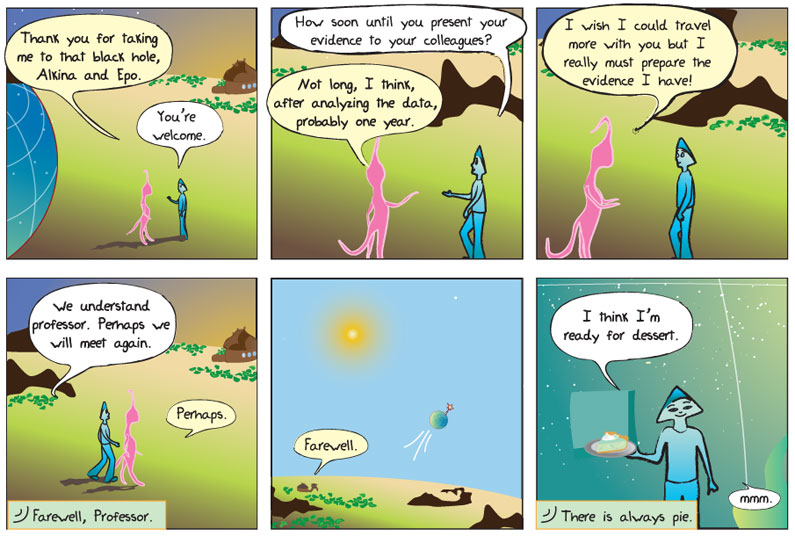 Panel 1.
Professor Ahmix: Thank you for taking me to that black hole, Alkina and Epo.
Alkina: You’re welcome.

Panel 2.
Alkina: How soon until you present your evidence to your colleagues?
Professor Ahmix: Not long, I think, after analyzing the data, probably one year.

Panel 3.
Professor Ahmix: I wish I could travel more with you but I really must prepare the evidence I have!

The professor is talking about analyzing data that he obtained near the black hole. When scientists make measurements they understand that the tools they use are not perfect. When scientists analyze data, they often use mathematical models that can take into account those imperfections. For example, the standard mathematical model for gravity is Einstein’s General Theory of Relativity. This would be the model that the professor needs to use to analyze his data from the vicinity of the black hole.

But on Earth, we can use a simplified model for gravity, which is Newton’s Law of Gravitation. Either model for gravity can be used to make predictions about how things will behave where gravity is present. Scientists can measure the effects of gravity, for example, recording the time it takes for a rock dropped from the top of a building to reach the ground. After calculating how fast the rock fell, scientists can determine the strength of gravity on Earth.

But the tools and the equipment used to record the data, are not perfect. If the stopwatch only measures to the nearest second, then each measurement of the acceleration of the rock may be off by as much as half a second. Also, the scientist may make small mistakes in performing the experiment, like dropping the rock too soon or too late.

Only after a scientist has taken many measurements of the same experiment (dropping the same rock from the same building over and over again) can he or she find the average acceleration of the rock. This value will have a better accuracy than one second, if that same stopwatch is used. If the scientist uses a more sensitive stopwatch, then he or she will be able to be able to make more accurate measurements.

Science, Measurements, Errors, and Uncertainty – How measurement and accuracy affects science, and why they are important.