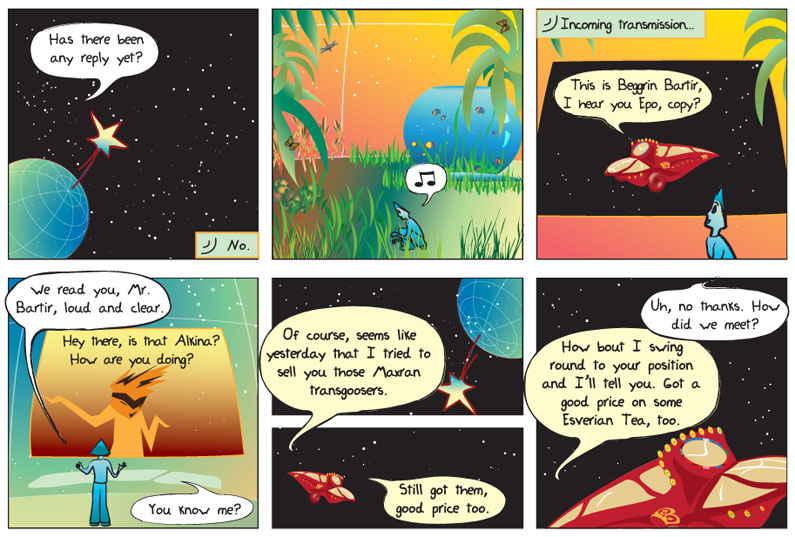 Panel 1.
Alkina: Has there been any reply yet?

Panel 3.
Incoming transmission: This is Beggrin Bartir, I hear you Epo, copy?

Panel 4.
Alkina: We read you, Mr. Bartir, loud and clear.
Bartir: Hey there, is that Alkina? How are you doing?
Alkina: You know me?

Panel 5.
Bartir: Of course, seems like yesterday that I tried to sell you those Maxran transgoosers. Still got them, too, at a good price.

Panel 5.
Alkina: Uh, no thanks. How did we meet?
Bartir: How bout I swing round to your position and Ill tell you. Got a good price on some Esverian Tea, too.

Warp Drive, When? – Why is interstellar travel so difficult and what is NASA doing about it.

While in the far future trade between worlds within the Milky Way may be a possibility, the technology we have today does not allow for reasonable interstellar trading…even if we did find someone out there to trade with.

On Earth, science has made it possible to order a book online and get it delivered to your house the next day from almost anywhere in the world. But in space the highest speed we have reached with a manned vehicle is approximately 40,000 km/hour. At this speed it would take about 27,000 years to travel one light year.

The nearest star to Earth, other than the Sun, is Proxima Centari at 4.3 light years away. It would take us 116,000 years to get there. Even closer to home the distances are staggering. Flying to the other planets in our Solar System at these speeds takes years to accomplish.

So, while Epo and Alkina exist in a future where interstellar travel is very fast and trade between alien civilizations is possible, today, even if we were to detect life on a planet orbiting the closest star it would take at least 8.6 years just to say “hello” and hear their reply!