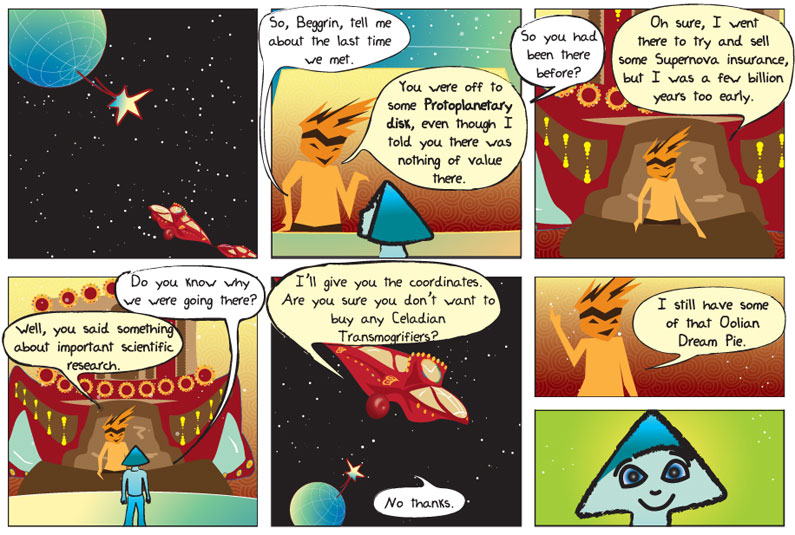 Panel 1.
Epo and Bartir’s ship are near each other.

Panel 2.
Alkina: So, Beggrin, tell me about the last time we met.
Bartir: You were off to some Protoplanetary disk, even though I told you there was nothing of value there.
Alkina: So you had been there before?

Panel 3.
Bartir: Oh, sure, I went there to try and sell some Supernova Insurance, but I was a few billion years too early.

Panel 3.
Alkina: Do you know why we were going there?
Bartir: Well, you said something about important scientific research.

Panel 4.
Bartir: I’ll give you the coordinates. Are you sure you don’t want to buy any Celadian Transmorgifiers?
Alkina: No thanks.

Panel 5.
Bartir: I still have some of that Oolian Dream Pie…

Protoplanetary disk – A disk of swirling gas and dust surrounding a young star that may eventually form into the planets, asteroids and debris of a solar system.

Beta Pictoris – is a star around which exists a dusty disk theorized by astronomers to be the beginnings of a solar system.

Solar system with 4 stars? – Astronomers have discovered a protoplanetary disk orbiting one of the stars in a newborn quadruple star system.