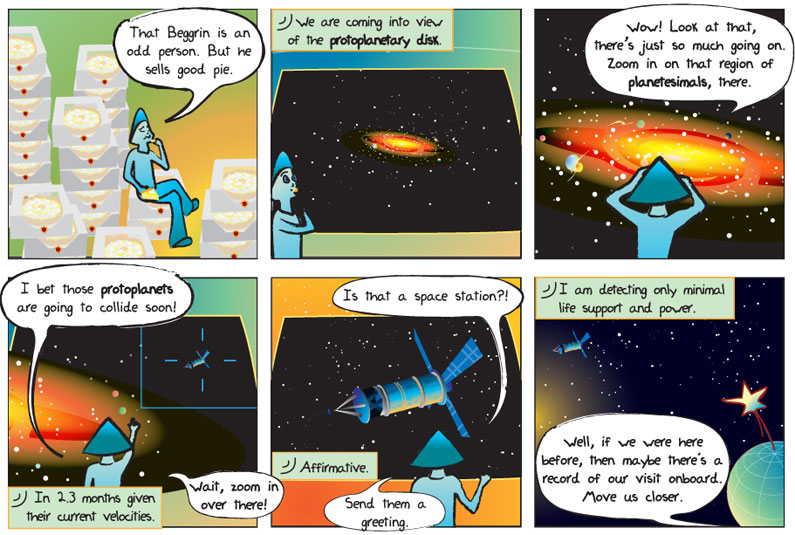 Panel 1.
(Alkina, surrounded by boxes of Dream Pie)
Alkina: That Beggrin sure is an odd person. But he sells good pie.

Panel 2.
Epo: We are coming into view of the protoplanetary disk.

Panel 3.
Alkina: Wow! Look at that, there’s just so much going on. Zoom in on that region of planetismials, there.

Panel 4.
Alkina: I bet those protoplanets are going to collide soon!
Epo: In 2.3 months, given their current velocities.
Alkina: Wait – zoom in over there!

Panel 5.
Alkina: Is that a space station?
Epo: Affirmative.
Alkina: Send them a greeting.

Panel 6.
Epo: I am detecting only minimal life support and power.
Alkina: Well, if we were here before, then maybe there’s a record of our visit onboard. Move us closer.

Planetesimal – objects that are large enough to gravitationally attract gas, dust and other planetesimals, thus forming larger bodies, and eventually protoplanets. Planetesimals range in size from about 1 km to the size of the Moon.

Protoplanets – Regions of dust and gas in a protoplanetry disk that are condensing under their own gravity but are still too unstable to be considered fully formed planets. Protoplanets are at least as large as the Moon. Collisions between protoplanets can eventually form planets.