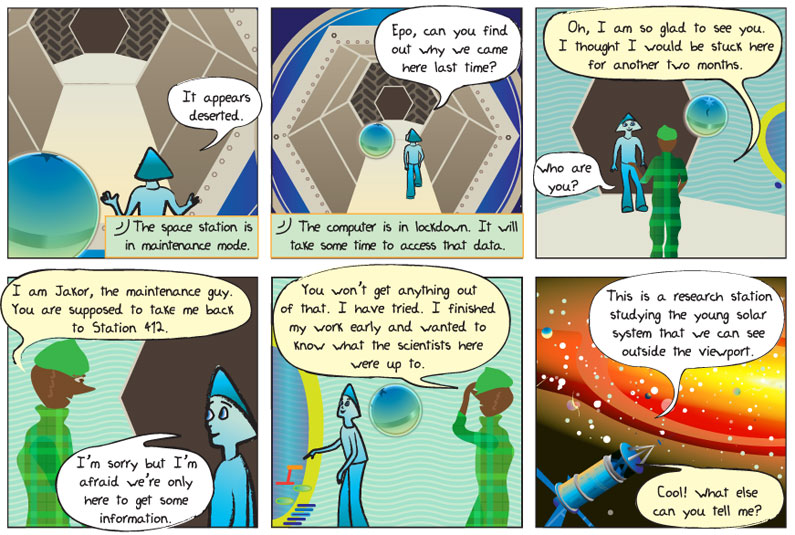 Panel 1.
Alkina: It appears deserted.
Epo: The space station is in maintenance mode.

Panel 2.
Alkina: Epo, can you found out why we came here last time?
Epo: The computer is in lockdown. It will take some time to access that data.

Panel 3.
Alkina: Who are you?
Jakar: Oh, I am so glad to see you. I thought I would be stuck here for another two months.

Panel 4.
Jakar: I am Jakar, the maintenance guy. You are supposed to take me back to Station 412.
Alkina: I’m sorry but I’m afraid we’re only here to get some information.

Panel 5.
Jakar: You won’t get anything out of this station. I have tried. I finished my work early and wanted to know what the scientists here were up to.

Panel 6:
Alkina: This is a research station studying the young solar system that we can see outside the viewport.
Jakar: Cool! What else can you tell me?

The space station that Epo and Alkina are visiting resides outside the solar system it is being used to study. A space station is usually designed to support at least a few crew members who operate it while conducting experiments in outer space. This means space stations have to be large enough to contain sleep, work and exercise areas.

There are many technological and physical challenges we must overcome to build a space station like the one that Epo and Alkina are visiting. Teams of scientists and engineers around the world are working to make space facilities possible. Someday you might be a member of one of those teams.