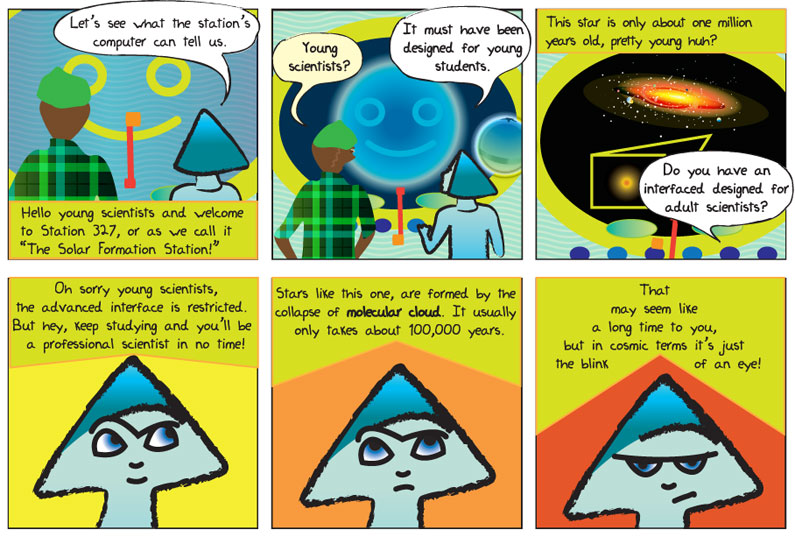 Panel 1.
Alkina: Let’s see what the station’s computer can tell us.
Station: Hello young scientists and welcome to Station 327, or as we call it ‘The Solar Formation Station!’

Panel 2.
Jakar: Young scientists?
Alkina: It must have been designed for young students.

Panel 3.
Station: This star is only about one million years old, pretty young, huh?
Alkina: Do you have an interface designed for adult scientists?

Panel 4.
Station: Oh sorry young scientists, the advanced interface is restricted. But hey, keep studying and you’ll be a professional scientist in no time!

Panel 5.
Station: Stars like this one are formed by the collapse of molecular clouds. It usually only takes about 100,000 years.

Panel 6.
Station: That may seem like a long time to you, but in cosmic terms it’s just the blink of an eye!

Molecular cloud – Also sometimes referred to as a stellar nursery if new stars are being formed within the cloud. Molecular clouds are giant regions of diffuse gases that can be as big as 326 light years (3.1 x 1015 km) across. They are composed mostly of Hydrogen and Helium, with a few other elements dispersed throughout. Internal gravitation in denser regions of the cloud can trigger the collapse of parts of the cloud, and when this happens, new stars can be formed.

A molecular cloud is just exactly what its name suggests: a big cloud of molecules. Of course, “big” might not accurately describe the size of these clouds, since they can be over 326 light years – or about 250,000 times the diameter of our solar system! They are called molecular because they are dense enough to contain molecules instead of just atoms. Their large density shields them from the ambient ultraviolet (UV) light radiation in space, which would otherwise dissociate, or break apart, the molecules. The most abundant molecule they contain is hydrogen (H2), but they have also been known to contain carbon monoxide (CO), carbon dioxide (CO2), water (H2O) and other elements. The carbon and oxygen atoms in these molecules were originally formed in previous stars. Scientists have even discovered molecular clouds that contain the amino acid glycine, one of the building blocks of DNA!