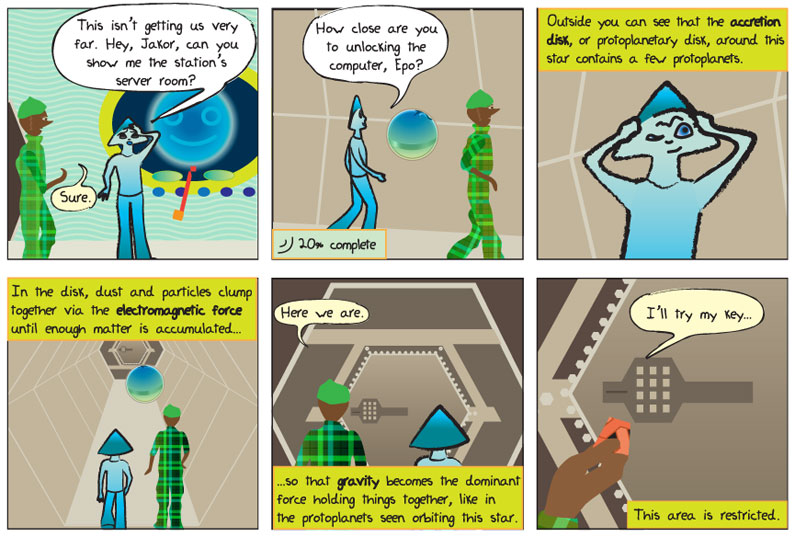 Panel 1.
Alkina: This isn’t getting us very far. Hey, Jakar, can you show me the station’s server room?
Jakar: Sure.

Panel 2.
Alkina: How close are we to unlocking the computer, Epo?

Panel 3.
Station: Outside you can see that the accretion disk, or protoplanetary disk, around this star contains a few protoplanets.

Panel 4.
Station: In the disk, dust and particles clump together via the electromagnetic force until enough matter is accumulated…

Station:  …so that gravity becomes the dominant force holding things together, like in the protoplanets seen orbiting this star.

Station: This area is restricted.

(protoplanetary) Accretion Disk – Accretion disks are not just found around black holes. When dust and gas orbit an object in a flattened disk-like shape, collisions within the disk cause most of the material to fall inward to create a central object. The remaining material moves outward, carrying with it all the angular momentum. In a protoplanetary accretion disk, a star will form at the center, while in the disk itself material can accumulate to form planets. Protoplanetary disks are a special type of accretion disk.

Electromagnetic Force – The electromagnetic (or EM) force is one of the four known universal forces, along with gravity and the strong and weak nuclear forces. The EM force holds all the molecules and cells in your body together and is the result of interactions between charged particles (protons and electrons) within the atoms and molecules.

Gravity – is the universal force of attraction between all forms of matter and energy.

Strong and Weak Nuclear Force – the strong and weak nuclear forces are short-range forces that act only inside atomic nuclei. The strong force holds the nuclei together. The weak force is responsible for radioactivity and the emission of particles from nuclei.

A protoplanetary disk is a pretty chaotic environment. If you tried to fly a small space craft through it, you’d have a harder time than if you tried to fly through our asteroid belt. Not only would your ship be impacted by large and small rocks and debris, but the temperature of the disk would heat up the closer you traveled to the parent star.

But even with all the large and small rocks, most of it is only held together by the EM force, the same way clumps of dirt or the cells in your body are held together. The gravity of the parent star keeps the clumps and gas in orbit. A lot of rocks, gas and dust have to come together before there is enough mass to create a strong gravitational force. When this happens, the gravitational force exerted by the combined mass of the material dominates over the EM force holding them together. This is approximately when planetesimals form, which are over a kilometer in diameter. Their added gravitational attraction causes the planetesimals to grow rapidly at this point, with many merging together to form full-fledged planets.

Explore the Fundamental Forces in a Particle Adventure!