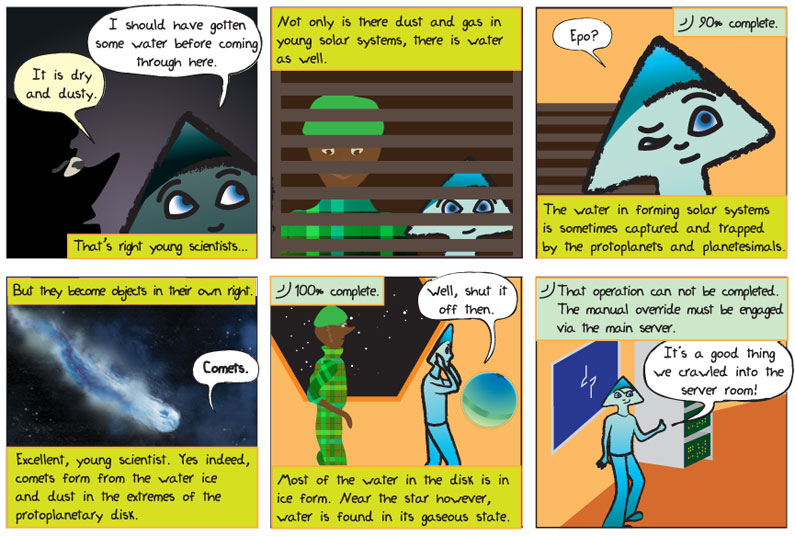 Panel 1.
Jakar: It is dry and dusty.
Alkina: I should have gotten some water before coming through here.
Station: That’s right young scientists…

Panel 2.
Station: Not only is there dust and gas in the young solar systems, there is water as well.

Panel 3.
Alkina: Epo?
Epo: 90% complete.
Station: The water in forming solar systems is sometimes captured and trapped by the protoplanets and planetesimals.

Panel 4.
Station: But they become objects in their own right.
Alkina: Comets.
Station: Excellent, young scientist. Yes indeed, comets form from the water ice and dust in the extremes of a protoplanetary disk.

Panel 5.
Epo: 100% complete.
Alkina: Well, shut it off then!
Station: Most of the water in the disk is in ice form. Near the star however, water is found in its gaseous state.

Panel 6.
Epo: That operation can not be completed. The manual override must be engaged via the main server.
Alkina: It’s a good thing we crawled into the server room!

Comets – are dusty bodies of ice that orbit a star. We typically imagine comets with their characteristic tails; but the tails only form when their orbits bring them close to a star. Comets have three distinct tails: one caused by dust pushed out by radiation pressure from the star, the ion tail caused by stellar winds melting the frozen ice and gas and pushing it back, and a tail of sodium escaping from the dust. The sodium tail is not visible to the naked eye. These tails point in slightly different directions but always away from the star.

The tour-guide computer talks about how water in a forming solar system is in gas form near the star and in the form of ice further away. What’s another form that water can take? Liquid! That’s right. Scientists call these forms “phases,” and they are either liquid, solid, or gas (there are two others, plasma and Bose-Einstein condensates but we aren’t concerned with those here).

What other elements or materials can you think of that go through phase transitions?

Solar System Exploration: Comets – Additional information about comets including missions to comets, and threats that comets and asteroids might pose to Earth.