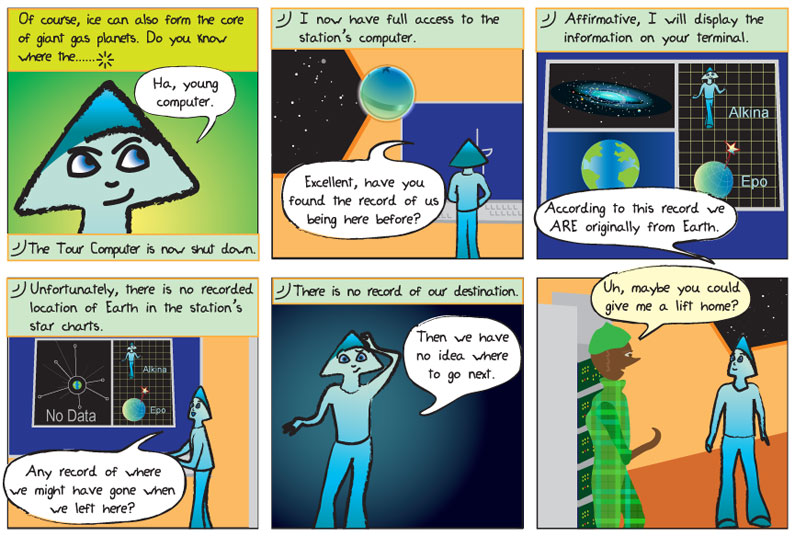 Panel 1.
Station: Of course ice can also form the core of giant gas planets. Do you know where the-
Alkina: Ha, young computer.
Epo: The Tour Computer is now shut down.

Panel 2.
Epo: I now have full access to the station’s computer.
Alkina: Excellent. Have you found the record of us being here before?

Panel 3.
Epo: Affirmative, I will display the information on your terminal.
Alkina: According to this, we ARE originally from Earth.

Panel 4.
Epo: Unfortunately, there is no recorded location of Earth in the stations’ star charts.
Alkina: Any record of where we might have gone when we left here?

Panel 5.
Epo: There is no record of our destination.
Alkina: Then we have no idea where to go next.

Panel 6:
Jakar: Um, maybe you could give me a lift home?

WorldWide Telescope – WorldWide Telescope (WWT) enables your computer to function as a virtual telescope, bringing together imagery from the best ground and space-based telescopes in the world. Experience narrated guided tours from astronomers and educators featuring interesting places in the sky.

Google Sky – To help you explore the far reaches of our universe, Google has teamed up with astronomers at some of the largest observatories in the world to bring you a new view of the sky.

Stellarium – Stellarium is a free open source planetarium for your computer. It shows a realistic sky in 3D, just like what you see with the naked eye, binoculars or a telescope.

The galaxy, being such a big place, is a hard thing to record onto something like a map; that’s where star charts come in. In its simplest form, a star chart is just a representation of the sky from a given place. Of course, more advanced star charts might include stars that are too dim to be seen with the naked eye, or even objects that don’t emit visible light, but instead emit radio waves or even gamma rays. You might wonder why Epo and Alkina couldn’t find Earth in the station’s star charts, but it’s important to remember that our sun is only one of somewhere between 200 and 400 billion stars in our galaxy. Talk about a needle in a haystack!