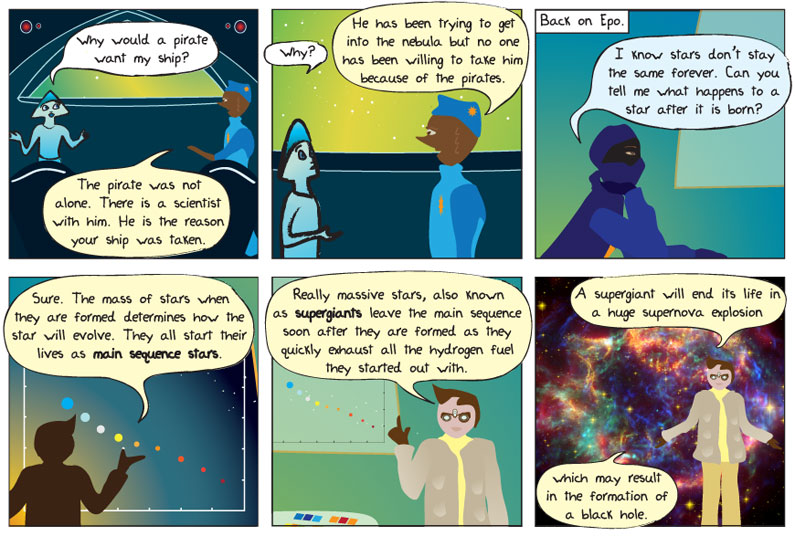 Panel 1.
Alkina: Why would a pirate want my ship?
Officer: The pirate was not alone. There is a scientist with him. He is the reason your ship was taken.

Panel 2.
Alkina: Why?
Officer: He has been trying to get into the nebula but no one has been willing to take him because of the pirates.

Panel 3.
Back on Epo.
Pirate: I know stars don’t stay the same forever. Can you tell me what happens to a star after it is born?

Panel 4.
Scientist: Sure. The mass of stars when they are formed determines how the star will evolve. They all start their lives as main sequence stars.

Panel 5.
Scientist: Really massive stars, also known as supergiants, leave the main sequence soon after they are formed as they quickly exhaust all the hydrogen fuel they started out with.

Panel 6.
Scientist: A supergiant will end its life in a huge supernova explosion. Which may result in the formation of a black hole.

Main sequence stars – are the ones that are actively fusing hydrogen into helium in their cores. Their inward gravitational force due to the mass of the star is balanced by the outward thermal pressure generated by nuclear fusion.

Supergiant (star) – is the most massive type of star. A supergiant may have a mass between 10 and 70 times that of the Sun, or even more. Its size (diameter) will typically be several times larger than that of our own Sun.

Strictly speaking, the main sequence is a region on a chart, called the Hertzsprung–Russell (H-R) diagram, which plots the luminosity (or intrinsic brightness) of stars versus their temperature. It turns out that stars that produce their energy by converting hydrogen to helium in their cores all lie in a certain part of the plot, and that part has been given the name “Main Sequence.” All stars spend about 90% of their life on the main sequence. Once a star ceases core hydrogen burning it moves off the main sequence, either to become a giant or a supergiant. To learn more about the H-R diagram, please visit the H-R diagram page at the Sloan Digital Sky Survey website. The page has resources for teachers, students and the general public.

http://skyserver.sdss.org/dr1/en/proj/advanced/hr/– A brief description of supergiants and an example.

What is a Star? – More information about stars and links to activities.