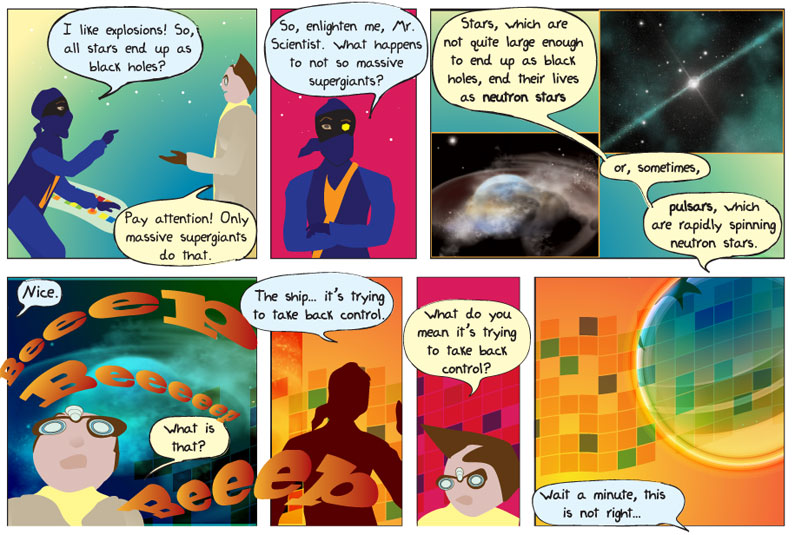 Panel 1
Pirate: I like explosions! So, all stars end up as black holes?
Scientist: Pay attention! Only massive supergiants do that.

Panel 2
Pirate: So, enlighten me, Mr. Scientist. What happens to not so massive supergiants?

Panel 3
Scientist: Stars that are not quite large enough to end up as black holes end their lives as neutron stars. Or, sometimes, pulsars, which are rapidly spinning neutron stars.

Panel 4
Pirate: Nice.
Epo: BEEEEEP
Scientist: What was that?

Panel 6
Pirate: Wait a minute, this is not right…

Neutron star – is the collapsed core, made up mostly of neutrons, of a supermassive star that was not large enough to form a black hole. It has a very small size ( a diameter about the same size as a small city) but a very large mass (at least 1.4 times the mass of our Sun).

Pulsar – is a spinning neutron star with a very strong magnetic field, which emits a beam of electromagnetic radiation. This makes the star appear to pulse as the electromagnetic beam moves in and out of our line of sight, similar to how a lighthouse works.

Ask an astrophysicist – Questions and answers related to neutron stars and pulsars.

NASA’s Fermi Telescope Probes Dozens of Pulsars – A news article about Fermi’s observation of pulsars some of which were not previously know. Includes an animation of a pulsar as seen by Fermi.