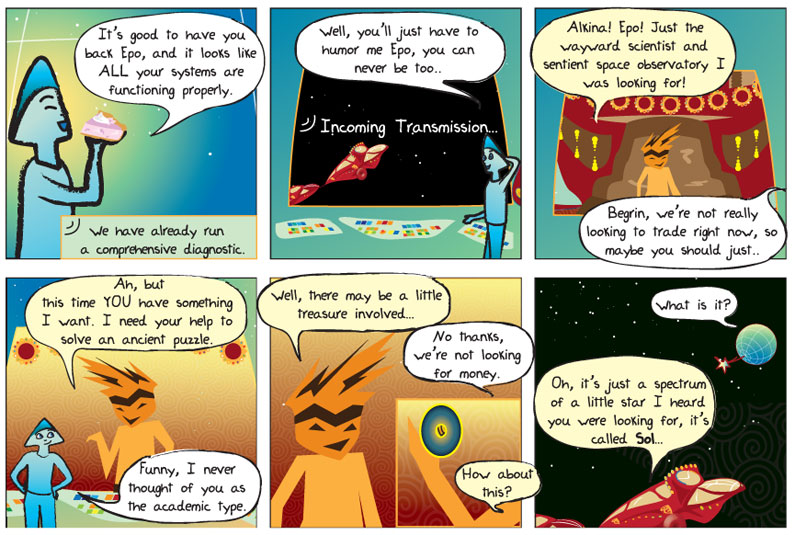 Panel 1
Alkina: It’s good to have you back Epo, and it looks like ALL your systems are functioning properly.
Alkina eats a slice of pie.
Epo: We have already run a comprehensive diagnostic.

Panel 2
Alkina: Well, you’ll just have to humor me, Epo, you can never be too…
Epo: Incoming transmission.

Panel 3
Begrin: Alkina! Epo! Just the wayward scientist and sentient space observatory I was looking for.
Alkina: Beggrin, we’re not really looking to trade right now, so maybe you should just…

Panel 4
Beggrin: Ah, but this time YOU have something I want. I need your help to solve an ancient puzzle.
Alkina: Funny, I never though of you as the academic type.

Panel 5
Beggrin: Well, there may be a little treasure involved…
Alkina: No thanks, we’re not looking for money.
Beggrin: How about this?

Panel 6
Alkina: What is it?
Begrin: Oh, just a spectrum of a little star I heard you looking for. It’s called Sol…

Sol – This is one of the proper names for the Sun. Sol was the god of the sun in Roman mythology. It is from this root that words like “Solar” are derived.

Spectrum – A diagram of how much light an object puts out as a function of wavelength.

The spectrum of an object measures how much light energy is emitted at any particular wavelength. For instance, our Sun puts out most of its energy at visible wavelengths from about 400-750 nanometers. (This is why our eyes evolved to see light at these wavelengths.) Our Sun also puts out light in other bands like radio, ultraviolet, and infrared, but not as much. An accurate spectrum of the sun could help Epo and Alkina pick out our Sun from the billions of other stars in our galaxy.