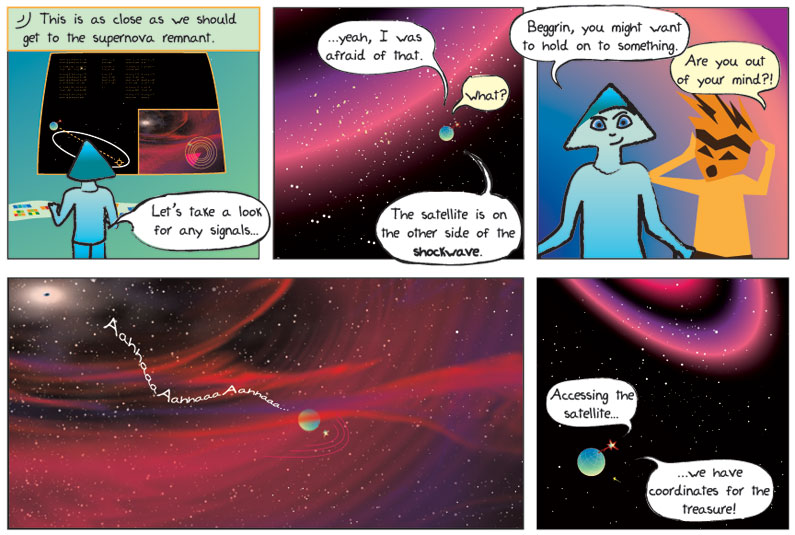 Panel 1
Epo: This is as close as we should get to the supernova remnant.
Alkina: Let’s take a look for any signals…

Alkina: Yeah, I was afraid of that.
Beggrit: What?
Alkina: The satellite is on the other side of the shockwave.

Panel 3
Alkina: Beggrin, you might want to hold on to something.
Beggrin: Are you out of your mind?

Panel 5
Alkina: Accessing the satellite…   …we have coordinates for the treasure!

(Stellar) Shockwave – The expanding wave of material ejected from the supernova explosion, and the interstellar material it sweeps up along the way. These can travel at many thousands of kilometers per second.

In a supernova explosion, the outermost layers of a star are violently ejected from the star at hypersonic speeds. These shock waves can travel at many thousands of kilometers per second (many hundreds of thousands of miles per hour), and as they travel along they plow into the gas and dust in the space surrounding the exploded star. The strong shocks cause the gas to heat up to millions of kelvin. Over a long time, so much material is swept up by the shocks that it slows down, and it eventually radiates away all its energy to space (that’s how we can see the shocks). All that is left is a supernova remnant, a hot bubble composed of the heavy elements and outer layers of the star, and the swept up surrounding material.

The area covered by these expanding shells can be vast. One of the most famous supernova remnants in our galaxy is the Cygnus Loop. It is estimated to be about 50 light-years across. Although it covers an area in the sky about 36 times as large as the full moon, it is far too faint to be visible with the naked eye. However, even now it glows in x-rays, and long-exposure visible light images reveal the ghostly glowing filaments that are the only visible remains of its once-mighty shocks.