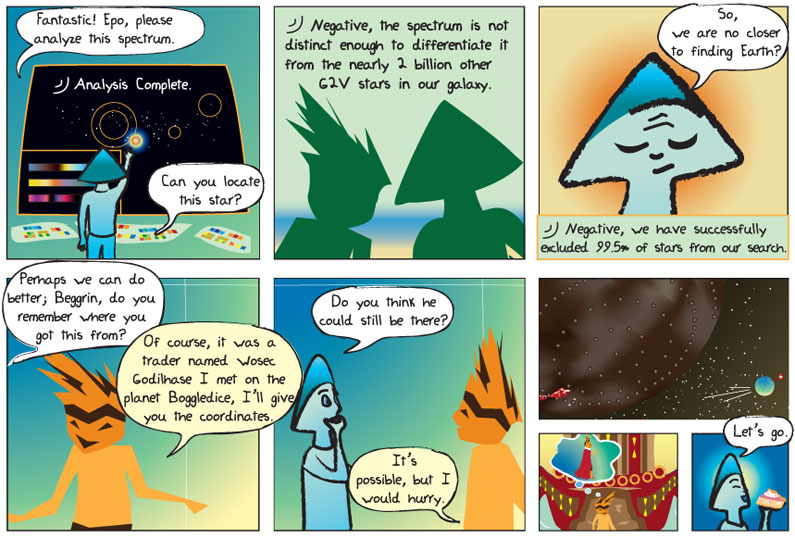 Panel 2
Epo: Negative. The spectrum is not distinct enough to differentiate it from the nearly two billion other G2V stars in our galaxy.

Panel 3
Alkina: So, we are no closer to finding Earth?
Epo: Negative, we have successfully excluded 99.5% of stars from our search.

Panel 4
Alkina: Perhaps we can do better. Beggrin, do you remember where you got this from?
Beggrin: Of course. It was a trader named Wosec Godehase I met on the planet Boggledice, I’ll give you the coordinates.

Panel 5
Alkina: Do you think he could still be there?
Beggrin: It’s possible, but I would hurry.

G2V – Our Sun is a type G main sequence star, but more specifically, it is a type G2V. The “G” means that it’s a yellow star. The “2” means that it is about 2/10ths of the way between a yellow “G” and an orange “K.” These arbitrary letter designations are historical in origin and are based on atomic absorption lines in the star’s spectrum. The “V” is a Roman numeral 5. It means the star is a main sequence star, often known as a dwarf star.

One of the striking things about the Universe is just how ordinary something as seemingly unique as our Sun can actually be. Astronomers estimate that there are somewhere between 200 and 400 billion stars in our galaxy. Of those, about 15-30 billion are G type stars like our Sun. The rest are given other letter designations, with O, B and A being hotter (bluer) than the Sun and K and M being cooler (redder). Of the roughly 15 to 30 billion G stars, only some fraction are G2Vs. In the comic, we set this number at 2 billion, but astronomers don’t actually know how many G2V stars are in our galaxy. This means that even though Epo and Alkina have a better idea of what they are looking for, they still have billions of our Sun’s closest relatives to sort through.