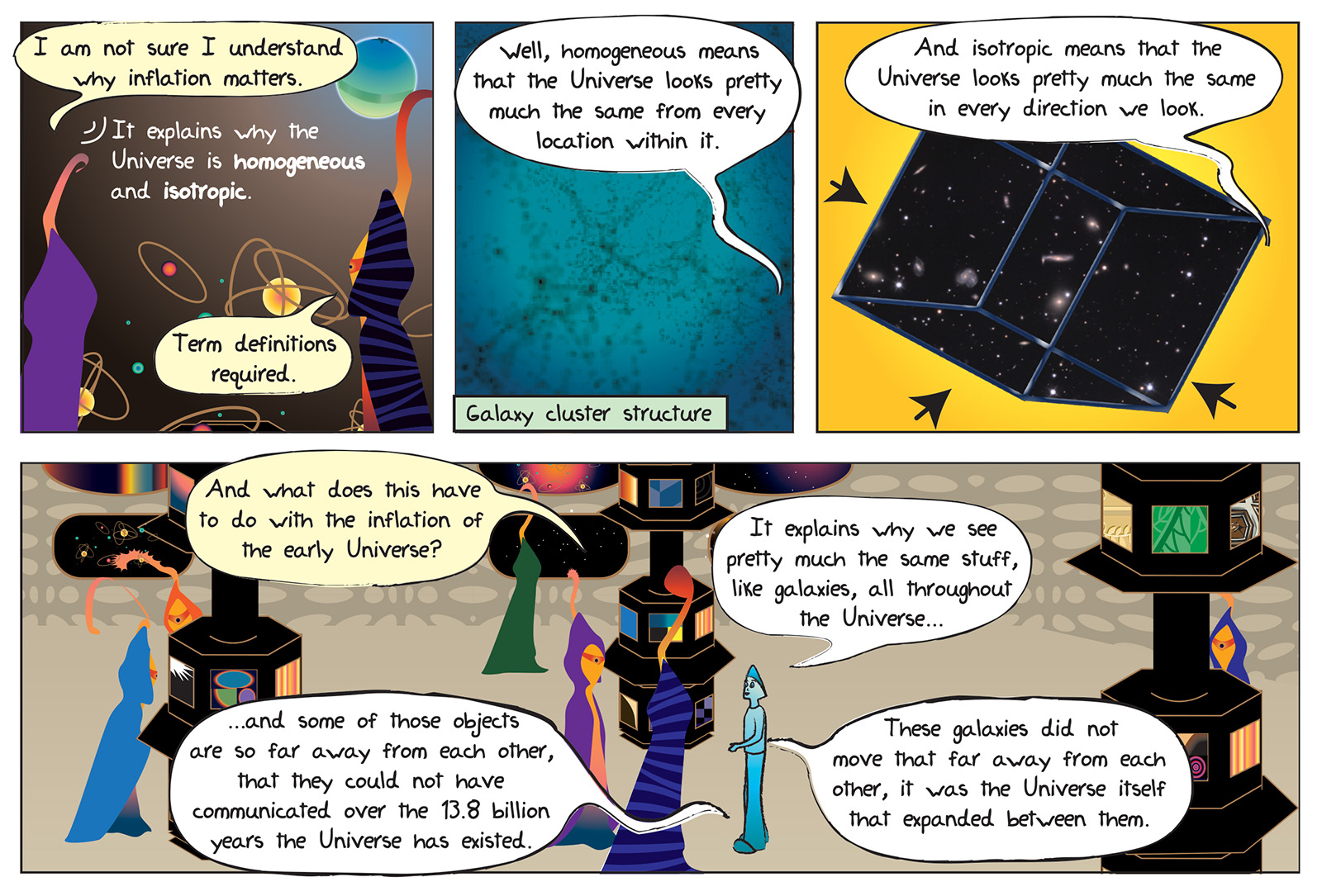 Worldship: I am not sure I understand why inflation matters.
Epo: It explains why the Universe is homogenous and isotropic.
Worldship: Term definitions required.

Panel 2
Alkina: Well, homogenous means that the Universe looks pretty much the same from every location within it.

Panel 3
Alkina: And isotropic means that the Universe looks pretty much the same in every direction we look.

Panel 4
Worldship: And what does this have to do with the inflation of the early Universe?
Alkina: It explains why we pretty much see the same stuff, like galaxies, all throughout the Universe, and some of those objects are so far away from each other that they could not have communicated over the 13.8 billion years the Universe has existed. These galaxies did not move that far away from each other, it was the Universe itself that expanded between them.

Homogeneous – Looks the same from every location.

Isotropic – Looks the same in every direction.

Isotropy and homogeneity are two very closely related concepts that are important to astronomers. When we look up at the night sky from Earth, it looks pretty much the same no matter which direction we decide to look. While this is not true on small scales, like within our own galaxy (think of the faint band of the Milky Way that is visible at some times of the year), or even inside the local group of galaxies or the local supercluster, on very large volumes, large enough to contain many galaxy clusters and filaments, the Universe looks about the same in every direction. This is the concept of isotropy. Additionally, if we were to leave Earth and Milky Way and travel to some distant galaxy, looking up at the night sky we would still see pretty much the same large scale features we see here; galaxies, galaxy clusters and galaxy filaments. This is the concept of homogeneity.

The relationship between these concepts and the inflation of the early Universe is subtle, but important. Astronomers ask questions like “why is the Universe homogenous and isotropic?” Put more specifically, astronomers wonder why the most distant regions on opposite sides of the sky look essentially the same. How did such regions get to have the same conditions of temperature, density, composition, etc, if they are so far apart that no communication could have ever taken place between them? Inflation helps to answer those questions by suggesting that the size of the Universe inflated extremely rapidly in a very short time, from an original size that was very small. It was so small that different regions were able to share energy and material, homogenizing conditions between them. Then, at a very early epoch in the history of the Universe (when it was a tiny fraction of a second old), something happened to cause space to expand extremely rapidly. Space was created so rapidly between adjacent regions that even light was not able to cross between them. This expansion, though it lasted for much less than a second, carried what were originally neighboring regions to very great distances, so it now appears that they could not have ever been in contact. While the rapid expansion of the inflationary epoch has stopped, the Universe is still expanding today.