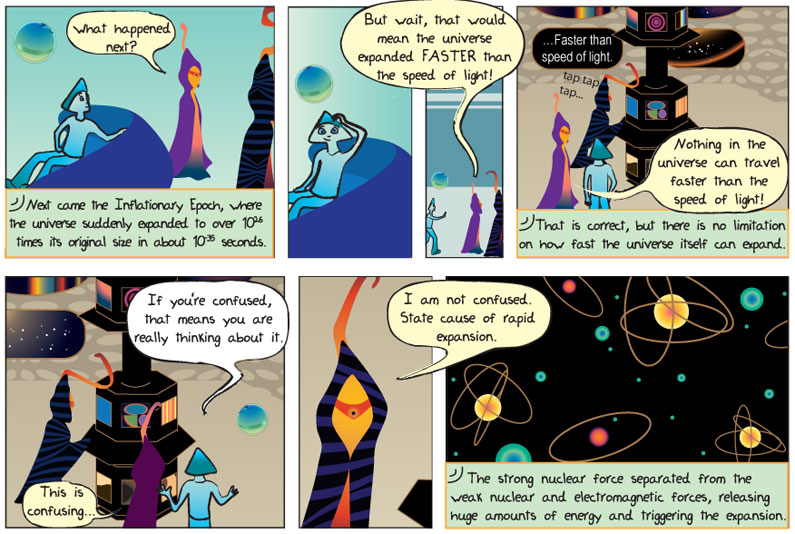 Panel 1
Worldship: What happened next?
Epo: Next came the Inflationary Epoch, where the universe suddenly expanded to over 10 to the 24th times it’s original size in about 10 to the negative 33 seconds.

Panel 2
Worldship: But wait, that would mean the universe expanded faster than the speed of light!

Panel 3
Worldship: Nothing can travel faster than the speed of light!
Epo: That is correct, but there is no limitation on how fast the universe itself can expand.

Panel 4
Worldship: This is confusing.
Alkina: If you’re confused, it means you are really thinking about it.

Panel 5
Worldship: I am not confused. State cause of rapid expansion.

Panel 6
Epo: The strong nuclear force separated from the weak nuclear and electromagnetic forces, releasing huge amounts of energy and triggering the expansion.

It’s hard to imagine a change in size as big as the one that occurred during the inflationary period; since 1026 is an unimaginably big number, but let’s try just the same. This would be about the same change in size as if an atom suddenly grew to be about 12,000 times the size of our solar system. Of course, that’s just measuring the Universe’s radius. If instead, we measured its volume, then we are instead looking at a change in size of 1078, which is even harder to imagine.

All of this expansion required energy; lots of it. This energy came from something called a “phase transition;” another result of this phase transition was that the strong nuclear force separated from the weak nuclear force and the electromagnetic force. The other force, gravity, had already separated out earlier in the Universe.

A phase transition is an abrupt change in a state of matter. You are familiar with the idea of phase transitions from everyday events. For example freezing water (or vaporizing it) is a type of phase transition. In a cold room, liquid water will get colder and colder until it reaches 0o C (32o F), the freezing point of water. At that point, a lot of energy (about 322 joules per gram of water) is released from the water (without it getting any colder) to transition it from the liquid phase into solid phase (ice). The energy released is the binding energy of the bonds in the ice crystal. A similar process is thought to have taken place in the early Universe, with the collapse of a scalar field, a postulated form of matter that plays the role ice did in our water example. And just as when water freezes, a lot of energy was released into the early Universe as it cooled and underwent this early phase transition.