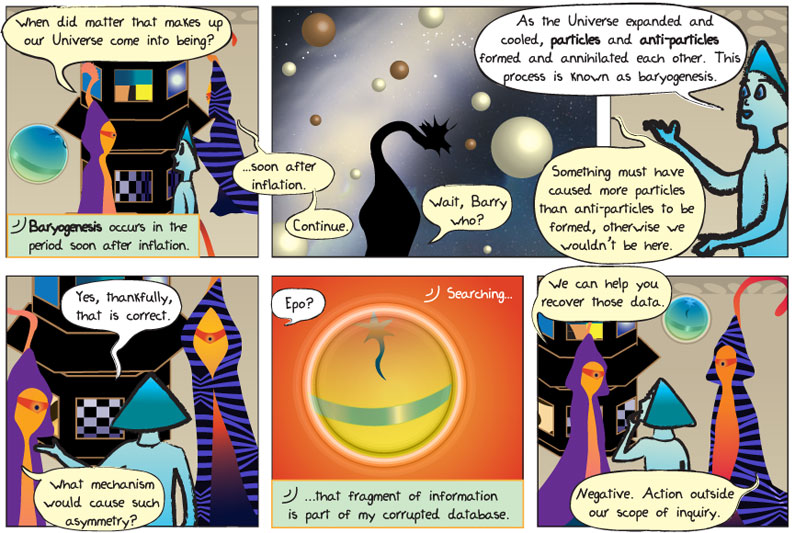 Panel 1
Worldship: When did matter that makes up our Universe come into being?
Epo: Baryogenisis occurs in the period soon after inflation.

Panel 3
Alkina: As the Universe expanded and cools, particles and anti-particles formed and annihilated each other. This process is known as Baryogenisis.
Worldship: Something must have caused more particles than anti-particles to be formed, otherwise we wouldn’t be here.

Panel 4
Alkina: Yes, thankfully, that is correct.
Worldship: What mechanism would cause such asymmetry?

Panel 5
Alkina: Epo?
Epo: Searching… that fragment of information is part of my corrupted database.

Panel 6
Worldship 1: We can help you recover those data.
Worldship 2: Negative. Action outside our scope of inquiry.

Particles/Anti-particles – In this context, particles simply refers to the basic units of matter that existed soon after the Universe began. Anti-particles and particles have identical masses, but opposite electrical charges. When a particle combines with its anti-particle they annihilate each other creating pure energy.

How do we know that particles and anti-particles were created during the Big Bang? Why isn’t it sufficient to have the Universe start off with just ordinary matter and not have to deal with anti-matter? To answer those questions exactly requires some complex particle physics but here is the gist of it.

In the beginning of the Universe, there only existed the energy of the Big Bang. As you may be aware from Einstein’s equation E = mc2, matter and energy are interchangeable. As the Universe expanded and cooled, energy changed into matter. As you may also know, many types of particles have electrical charges. For example, a proton is positively charged and an electron is negatively charged.

There is a rule in particle physics which says that the sum of the charges in an interaction has to remain unchanged. This rule is also known as charge conservation. When energy, which does not have a charge, changes into a particle with a positive charge, an anti-particle with an opposite (negative) charge must also be created.

You might be wondering – since we know that electrons and protons have opposite charges, why doesn’t that satisfy the charge conservation rule? While electrons and protons do have opposite charges, their masses differ, so they are not each other’s anti-particles. The anti-particle of an electron is a positron, and the anti-particle of a proton is called an anti-proton. Furthermore, current measurements show that electrons and positrons do not appear to be made of smaller particles, but are fundamental. In contrast, protons (and neutrons, and their anti-particles) are made up of smaller particles known as quarks, which will be described in the next episode.