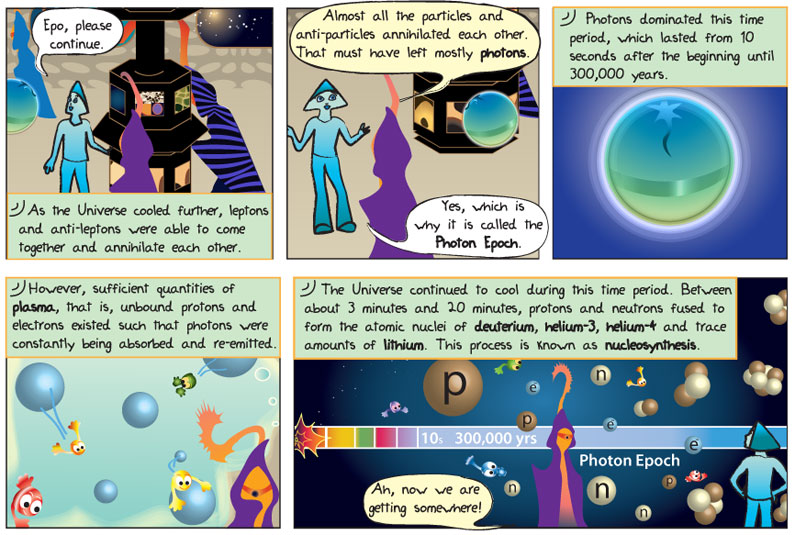 Panel 1
Alkina: Epo, please continue.
Epo: As the Universe cooled further, leptons and anti-leptons were able to come together and annihilate each another.

Panel 2
Worldship: Almost all the particles and anti-particles annihilated each other. That must have left mostly photons.
Alkina: Yes, which is why it is called the Photon Epoch.

Panel 3
Epo: Photons dominated this time period which lasted from ten seconds after the beginning until 300,000 years.

Panel 4
Epo: However, sufficient quantities of plasma, this is, unbound protons and electrons existed such that photons were constantly being absorbed and re-emitted.

Panel 5
Epo: The Universe continued to cool during this time period.  Between about 3 minutes and 20 minutes, protons and neutrons fused to form the atonic nuclei of deuterium, helium negative 3, helium negative 4, and trace amounts of lithium. This process is known as nucleosynthesis.
Worldship: Ah, now we are getting somewhere!

Photon – A photon is a particle, or “quantum” of electromagnetic radiation, or light. While light is often thought of as a wave, it also exhibits features that are particle-like.

Photon Epoch – The time near the beginning of the Universe which was dominated by photons and lasted from approximately 10 seconds to 3 x 105 years.

Helium-3 (He-3) – He-3, which is used in nuclear fusion research, is rare on Earth; only 1 in 10,000 helium atoms is He-3. He-3 has 2 protons and 1 neutron. Some scientists have speculated that it could be used as a source of fuel for future spaceships.

Helium-4 – The most common form of helium, making up 9,999 of every 10,000 helium atoms; it has two protons and two neutrons in its nucleus. A bare He-4 nucleus (stripped of its two electrons) is sometimes called an alpha-particle.

Nucleosynthesis – is the name given to the process that created atomic nuclei containing more than just a single proton.