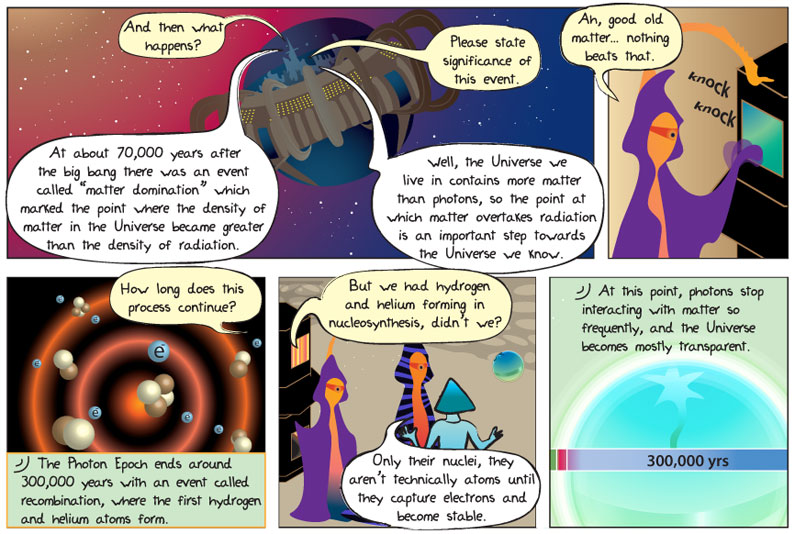 Worldship: And then what happens?
Alkina: About 70,000 years after the big bang there was an event called “matter domination” which marked the point where the density of matter in the Universe became greater than the density of radiation.
Worldship: Please state significance of this event.
Alkina: Well, the Universe we live in contains more matter than photons, so the point at which matter overtakes radiation is an important step towards the Universe we know.

Panel 3
Worldship: How long does this process continue?
Epo: The Photon Epoch ends around 300,000 years with an event called recombination, where the first hydrogen and helium atoms form.

Panel 4
Worldship: But we had hydrogen and helium forming in nucleosynthesis, didn’t we?
Alkina: Only their nuclei, they aren’t technically atoms until they capture electrons and become stable.

Panel 5
Epo: At this point, photons stop interacting with matter so frequently, and the Universe becomes mostly transparent.

Recombination is the event where the Universe had finally cooled to the point where atoms of hydrogen and helium can form. Of course, their nuclei already existed, but the Universe was still too hot for them to be able to capture electrons and become neutral (that is, have a zero net charge). Before recombination all the matter in the Universe existed as a hot plasma, but after recombination atoms existed and matter started to behave a little more like it does today. For instance, photons are able to move much longer distances before being scattered by particles. For this reason, we say that this is the point where the Universe became transparent, since light could move freely about it. Recombination marks the end of the photon epoch. Like many terms used in science, “Recombination” is a little misleading. It implies that the particles started out combined, were somehow separated, and then RE-combined. In fact, at the point of recombination, positive nuclei and negative electrons came together to form stable neutral atoms for the first time.