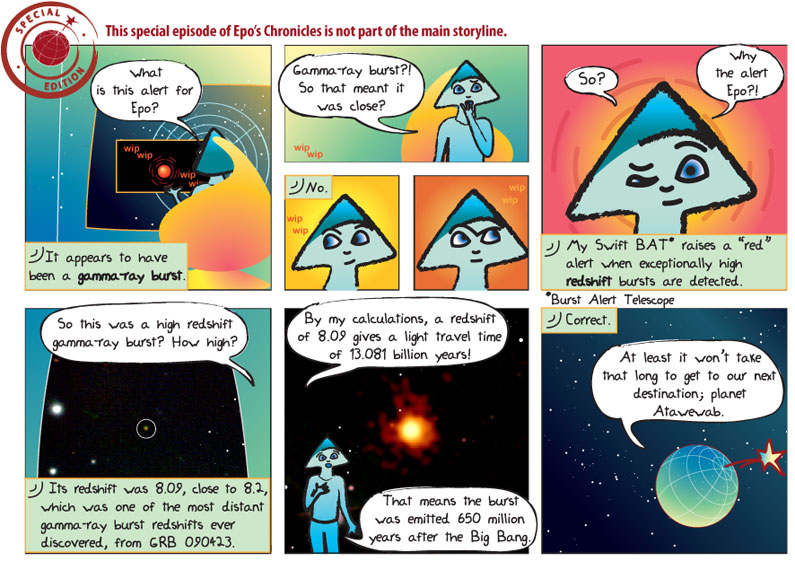 Redshift (cosmological) – This is the name given to the apparent change in the wavelength of light due to the expansion of the universe. Scientists know what the spectrum of a galaxy should look like (based on the laboratory spectra of light emitted from known elements). In all but a few nearby galaxies, the familiar spectral lines are shifted to longer wavelengths than would be measured in a laboratory. Red light is at the long wavelength end of the visible spectrum, and blue light is at the short wavelength end, so shifts to longer wavelengths are called redshifts. The cosmological redshift is denoted by the letter z, and it is defined such that the universe has expanded by an amount 1+z over the time the light has traveled to us. So an object with redshift z=1 is seen when the universe was half its present size (it is twice as big as when the light was emitted), if z=2 the universe is three times bigger than when the light was emitted, if z=3 the universe is four times bigger, and so on.

Epo is a highly advanced scientific laboratory and observatory with top of the line hardware, and instruments. The Swift Burst Alert Telescope is actually a 17th generation model of the original Burst Alert Telescope (BAT) on the Swift satellite, which was launched in 2004. The BAT detectors, both the originals and those on Epo, are able to conduct a continuous all-sky survey for gamma rays.

GRB 090423 was a gamma-ray burst event that was detected on April 23rd, 2009. The Swift satellite was able to accurately pinpoint its location, and as a result, ground based observatories such as Gemini, VLT, TNG and others, were able to make followup observations. Their observations measured its brightness changes over time and its redshift, which was approximately z=8.2.