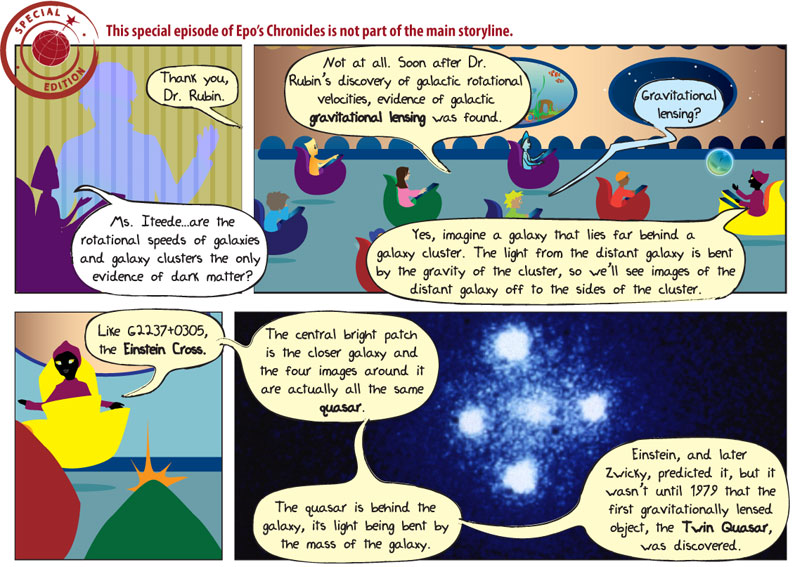 Panel 2.
Teacher: Not at all. Soon after Dr. Rubin’s discovery of galactic rotational velocities, evidence of galactic gravitational lensing was found.
Entoz: Gravitational lensing?
Teacher: Yes, imagine a galaxy lies far behind a galaxy cluster. The light from the distant galaxy is bent by the gravity of the cluster, so we’ll see the distant galaxy off to the sides of the cluster.

Panel 4.
Teacher: The central bright patch is the closer galaxy and the four lights around it are actually all the same quasar. The quasar is behind the galaxy, its light being bent by the mass of the galaxy. Einstein, and later Zwicky, predicted it, but it wasn’t until 1979 that the first gravitationally lensed object, the Twin Quasar, was discovered.

Gravitational lensing – The gravitational bending of light due to the gravity of a foreground object.

Einstein Cross – Also known as G2237+0305, is an example of gravitational lensing, where a foreground galaxy has produced four images of the same quasar that lies directly behind the galaxy.

Quasar – An active galaxy where one of the jets is pointed towards, but not directly at, the observer.

Twin Quasar – Also known as QSO 0957+561 A/B, was the first gravitationally lensed object to be discovered (1979) and consists of a double imaged quasar formed by a foreground galaxy’s gravity which is nearly directly inline with QSO 0957+561 B and Earth.

In principle, all physical objects bend space-time around them. This gravitational distortion causes light to be deflected if it passes near an object. Only very massive objects create large enough distortions for the bending of light to be detected. For example our Sun bends the light of stars behind it such that during solar eclipses the shifted location of the background stars can be measured. This was first observed in 1919 by Sir Arthur Eddington. His findings were the first observational test of Einstein’s Theory of General Relativity, which had predicted that objects bend light via their gravitational warping of space-time. Eddington found that the amount of deflection of the background stars during the eclipse was precisely what had been predicted by General Relativity.

Einstein, Zwicky, and others later realized that not only could an object’s mass warp space-time to deflect the apparent position of background stars and galaxies, but that on large scales galaxies could act as a lens, producing multiple images of and magnifying background galaxies that would otherwise be completely hidden by the foreground galaxy or be too faint to see.

On a clear night, when a friend shines a flashlight at you from across a field you will see it easily. Yet if there was a large boulder directly between you and your friend, you wouldn’t see the flashlight at all. But in the realm of immense gravitational fields, if the rock had a large mass, as is the case of a galaxy in a gravitational lens, then the light could be bent around the “rock.” Depending on the positions of you, the flashlight, and the rock you might see the flashlight, or even multiple images of it, as in the Einstein Cross image.