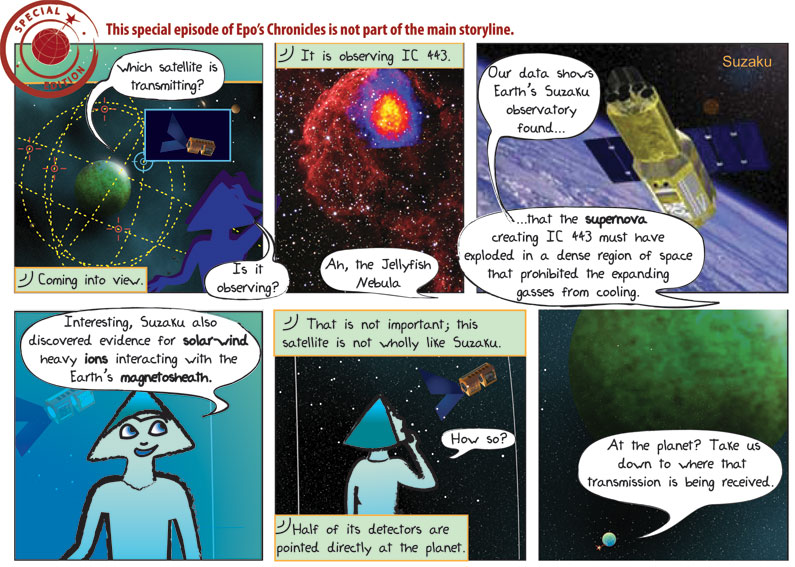 Solar wind – is the term given to the stream of charged particles that are ejected from the Sun’s atmosphere. One of the effects of the interaction of solar wind and the Earth’s atmosphere is a creation of beautiful light patterns in sky known as auroras.

Ions – An atom or molecule that has a net positive or negative electric charge due to the loss or gain of electrons.

Magnetosheath – The region in space where a planet’s magnetic field interacts with the charged particles of the solar wind.

The Suzaku (Astro-E2) observatory is a Japanese Aerospace Exploration Agency (JAXA) mission in collaboration with other Japanese and U.S. institutions, including NASA. Suzaku was launched in July of 2005. The satellite’s X-ray Imaging Spectrometer and Hard X-ray Detector continue to observe and take data of X-ray emitting objects.

By December of 2009, Suzaku had discovered two supernova remnants that were millions of degrees hotter than they should have been for their age. The information that Suzaku was able to extract from the X-ray emitting regions of the supernova remnants indicated that the stars originally exploded in a region of dense gas.

In early 2010, the research paper, Evidence for Solar-Wind Charge-Exchange X-ray emission from the Earth’s Magnetosheath won the Astronomical Society of Japan’s English Thesis Award for the discovery that “an unknown changing X-ray source found in the soft X-ray region in the 1990s was solar wind.”