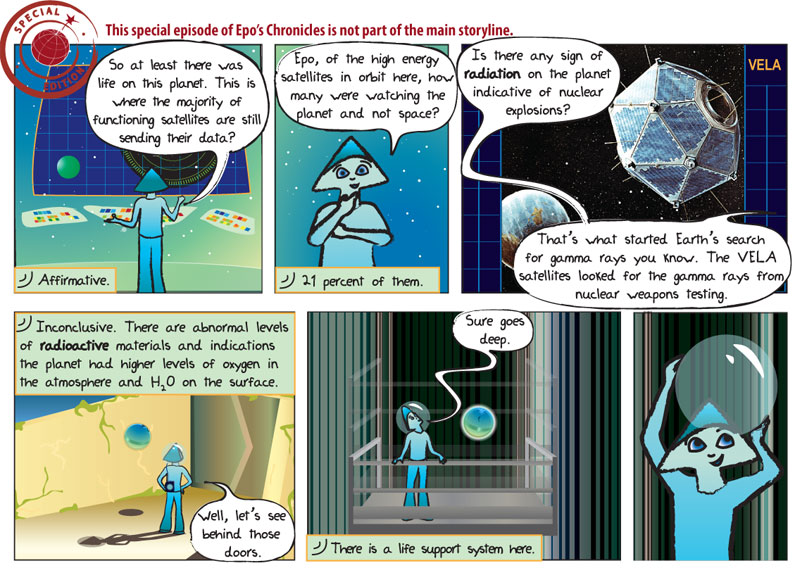 Radioactive – describes the tendency of unstable atomic nuclei to break apart into stable ones by emitting particles and (electromagnetic) radiation.

Project Vela was a U.S. military project designed to detect the use of nuclear weapons on Earth or in space. A part of Project Vela was the VELA satellites. These were the first x-ray and gamma ray detecting satellites (there were 12 VELA satellites in all). They were placed in orbit by the U.S. starting in 1963. Their purpose was to detect the detonation of nuclear bombs in space or on or near the Moon. This was part of the verification effort of the Partial Nuclear Test Ban Treaty with the Soviet Union; any space-based tests of nuclear weapons would have violated the treaty.

Nuclear weapons release large amounts of x-rays and gamma rays, and these have a very specific light curve (an extremely short pulse). By the late 1960s scientists had begun to discover gamma-ray events whose light curves did not match those of nuclear weapons. It was soon clear that these gamma-ray “bursts” were not coming from Earth, nor from within our Solar System, but their nature and origin remained a mystery for the next three decades. It is now known that the gamma-ray bursts originate in distant galaxies, well outside our own Milky Way, and many appear to result from the sudden collapse of very massive stars.

Vela 5A and Vela 5B – NASA webpages for two of the Vela satellites.