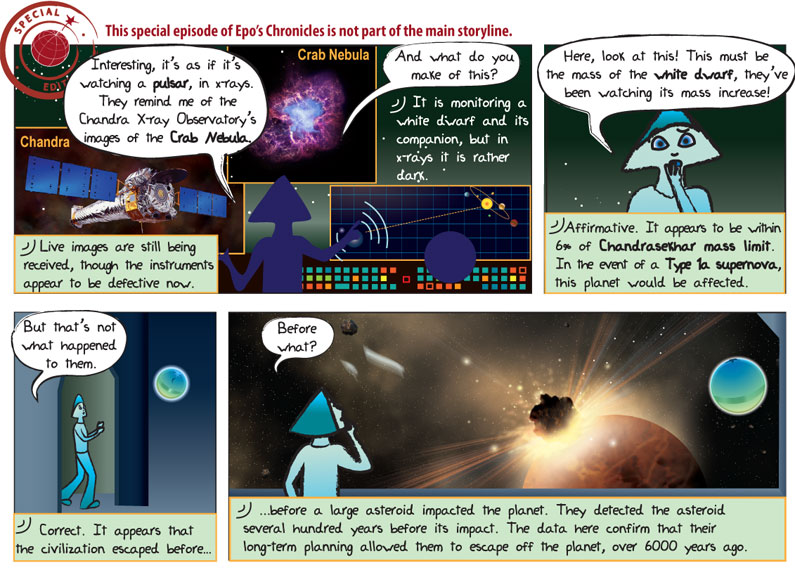 Pulsar – A type of spinning magnetized neutron star that emits pulses of light like a lighthouse. Pulsars are thought to have small bright spots on their surface where the magnetic poles are. Only when these spots are visible do we see emission, so as the pulsar spins it looks to us like it is pulsing on and off, hence the name pulsar.

Crab Nebula – A supernova remnant (expanding cloud left after a supernova explosion) in the constellation Taurus. The supernova itself was recorded by Chinese and Arab astronomers in 1054 A.D.

White dwarf – After the outer layers of a red giant are expelled into space to form a planetary nebula, the remaining core of the star, composed of the ash from its nuclear burning stages, is so hot that it glows bluish-white. A white dwarf is about the size of Earth, but with nearly the mass of the sun. It therefore is very dense. If a white dwarf has a companion star it can gravitationally draw gas from that companion, increasing its own mass in the process.

The Chandra Observatory is one of NASA’s “Great Observatory” missions. It is named for Subrahmanyan Chandrasekhar (1910 – 1995), an Indian astrophysicist, to honor his many contributions to science. Chandra was launched in July 1999 and continues to produce a wealth of data.

The observatory is responsible for the majority of the high resolution X-ray images of the Universe that we have today. Most recently Chandra has detected a galactic “super-volcano” in action within the galaxy M87.

Chandra has contributed to our understanding in many areas of the Universe, including dark matter, active galaxies, and x-ray emitting gas in galaxy clusters.