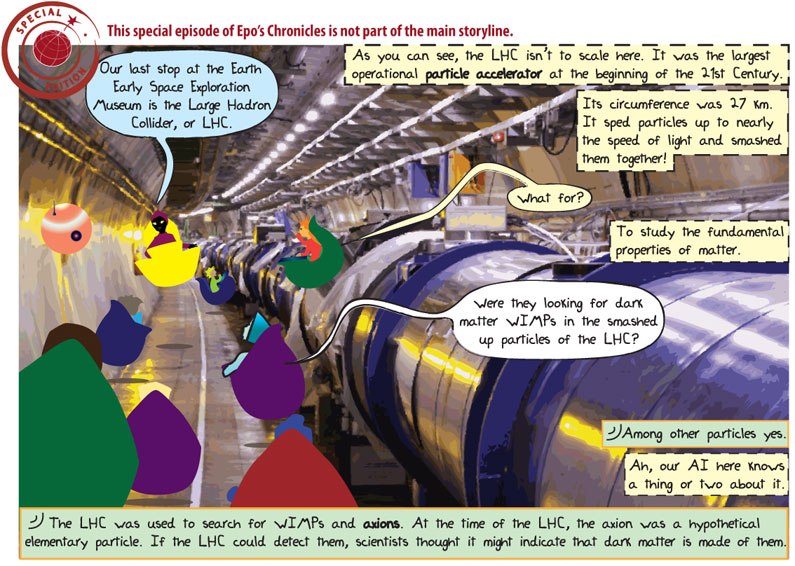 Single panel.
Teacher: Our last stop at the Earth Early Space Exploration Museum is the Large Hadron Collider, or LHC.

Guide: As you can see, the LHC isn’t to scale here. It was the largest operational particle accelerator at the beginning of the 21st Century. Its circumference was 27 kilometers. It sped particles up to nearly the speed of light and smashed them together!
Entoz: What for?

Guide: To study the fundamental properties of matter.
Alkina: Were they looking for dark matter WIMPs in the smashed up particles of the LHC?
Epo: Among other particles, yes.

Guide: Ah, our AI here knows a thing or two about it.
Epo: The LHC was used to search for WIMPs and axions. At the time of the LHC, the axion was a hypothetical elementary particle. If the LHC could detect them scientists thought it might indicate that dark matter is made of axions.

Particle accelerator – These devices accelerate charged particles to speeds near the speed of light. By colliding the particles together and studying what comes out of the collisions, scientists are able to learn about the fundamental properties of matter.

Axion – A hypothetical subatomic particle, introduced in the Peccei-Quinn Theory, that is also a candidate for dark matter.

The Large Hadron Collider (LHC) is the world’s largest particle accelerator. Its main ring is over 3 kilometers in diameter, and runs through both French and Swiss territory. Built and run by the European Organization for Nuclear Research (CERN), the LHC was officially inaugurated in October of 2008 and spent most of the following year testing its operational stability. The LHC began its research phase in March of 2010 and has achieved the highest energy collisions of any collider to date.

By colliding particles together at speeds close to the speed of light, scientists are able to recreate environments similar to the early Universe. Studying these environments enables us to better understand the world that we live in and the natural laws that govern it. There is a possibility that the LHC could detect axions, if they exist. If the LHC does detect axions the discovery will bolster the likelihood that dark matter is composed of them.

Large Hadron Collider Outreach – The education and public outreach page for the LHC.

European Organization for Nuclear Research (CERN) Homepage – The public website for the organization that operates the LHC.