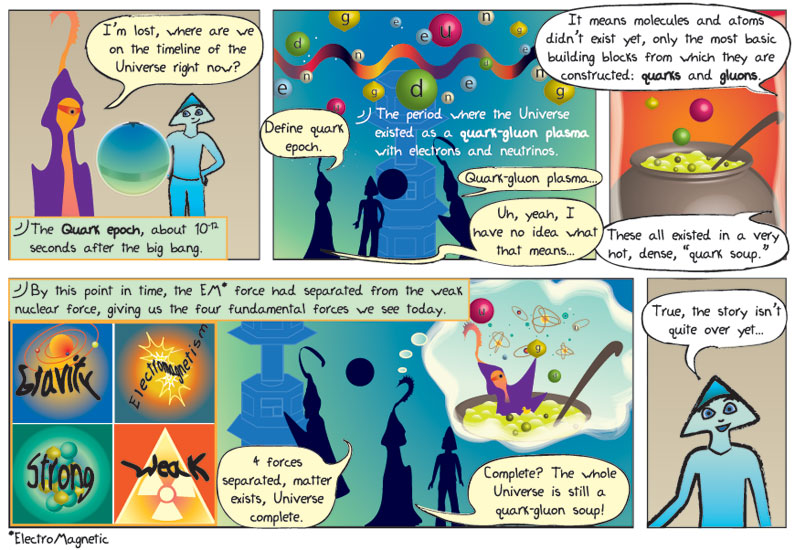 Panel 1
Worldship: I’m lost, where are we on the timeline of the Universe right now?
Epo: The Quark Epoch, about 10 to the negative 12 seconds after the Big Bang.

Panel 3
Alkina: It means molecules and atoms didn’t exist yet, only the most basic building blocks from which they are constructed: quarks and gluons. These all existed in a very hot, dense “quark soup”.

Panel 4
Epo: By this point in time, the electromagnetic force had separated from the weak nuclear force, giving us the four fundamental forces we see today.
Worldship: 4 forces separated, matter exists, Universe complete. Complete? The whole Universe is still a quark-gluon soup!

Panel 5
Alkina: True, the story isn’t quite over yet…

Quark Epoch – The period in the early Universe where matter existed, but only as a hot dense “soup” of quarks, gluons and a few other elementary particles.

Quark – One of the most basic subatomic building blocks of matter. Quarks combine to form protons and neutrons, as well as other more exotic particles.

Gluon – The subatomic particle which carries the strong nuclear force. “Gluon” is a fitting name for the particle that glues atomic nuclei together, overcoming the repulsion from the positively charged protons in nuclei.