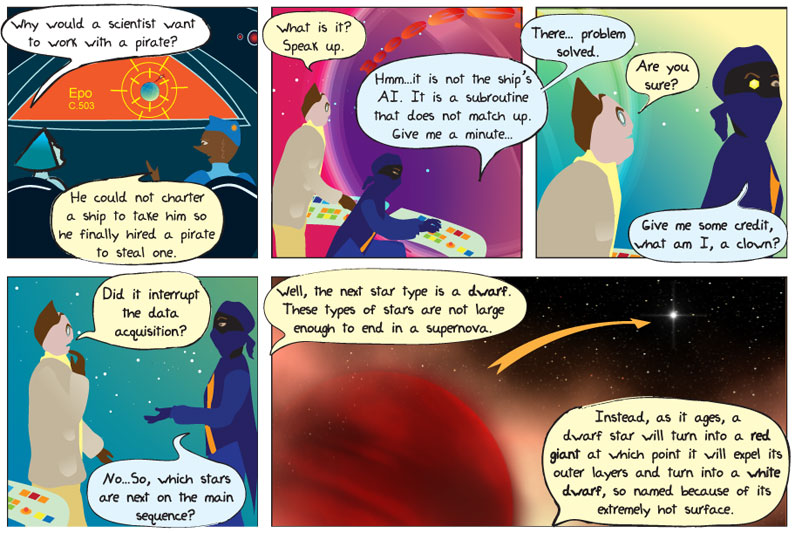 Panel 1
Alkina: Why would a scientist want to work with a pirate?
Officer: He could not charter a ship to take him so he finally hired a pirate to steal one.

Panel 2
Scientist: What is it? Speak up.
Pirate: Hmm… it’s not the ship’s AI. It is a subroutine that does not match up. Give me a minute… there. Problem solves.

Panel 3
Scientist: Are you sure?
Pirate: Give me some credit. What am I, a clown?

Panel 4
Scientist: Did it interrupt the data acquisition?
Pirate: No… so, which stars are next on the main sequence?

Panel 5
Scientist: Well, the next star type is a dwarf. These types of stars are not large enough to end in a supernova. Instead, as it ages, a dwarf star will turn into a red giant at which point it will expel its outer layers and turn into a white dwarf, so named because of its extremely hot surface.

Dwarf (star) – Is a low-mass main sequence star that is not quite as luminous or hot as more massive stars. Because of their low masses these types of stars can steadily burn (fuse) hydrogen for several billions of years. Our own Sun is a dwarf star.

White Dwarf – After the outer layers of a red giant are expelled into space to form a planetary nebula, the core of the star that is left behind is so hot that it glows white. A white dwarf is about the size of Earth, but with nearly the mass of the sun, and therefore it is very dense.

Ask an Astrophysicist – What is a red giant?

Where do White Dwarfs Come From? – How does a star like our Sun become a white dwarf? Find out here.