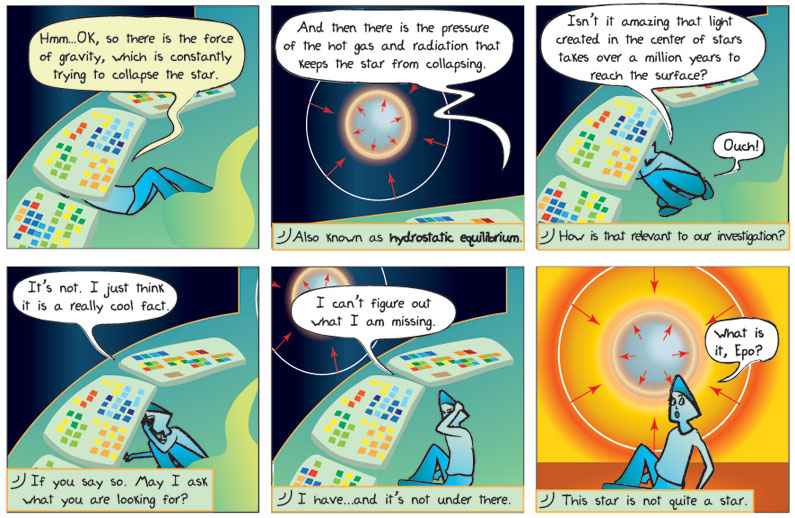 Panel 1.
Alkina: Hmmm… OK, so there is the force of gravity, which is constantly trying to collapse the star.

Panel 2.
Alkina: And then there is the pressure of the hot gases and radiation energy being produced by the fusion of lighter elements that keeps the star from collapsing.
Epo: Also known as hydrostatic equilibrium.

Panel 3.
Alkina: Isn’t it amazing that light created in the center of stars takes over a million years to reach the surface?
Epo: How is that relevant to our investigation?

Panel 4.
Alkina: It’s not. I just think it is a really cool fact.
Epo: If you say so. May I ask what ou are looking for?

Panel 5.
Alkina: I can’t figure out what I am missing.
Epo: I have and it’s not under there.

Hydrostatic equilibrium – Hydrostatic equilibrium in stars is the state in which the inward force of gravity is balanced by the outward force of the pressure inside the star, thus making the star stable against collapse or expansion. The pressure is due to the hot gas and the radiation, and each contributes different amounts to the total pressure depending on both the type of star and on what region of the star is being considered.

A star is a ball of gas held together by the mutual gravitational attraction of all its constituent parts, and the more mass a star has, the higher its gravity. So why don’t stars just collapse into a tiny volume under the influence of all that gravity? 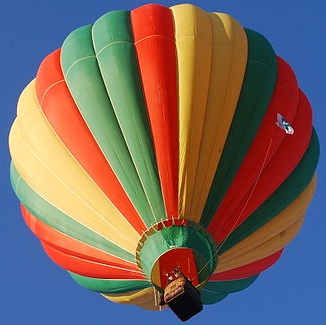 An interesting fact discussed in this week’s episode is that it takes a photon (light particle) emitted at the center of a star more than a million years to reach the star’s surface and escape into space. Taking the Sun as an example, it has a radius of about 700,000 km, or about twice the distance from the Earth to the Moon. If you turn on a powerful flashlight pointed at the Moon, it would take the light just over 1 second to reach the Moon. How is it possible that it takes light in the Sun more than a million years to travel only twice that distance? We expect it to take only about two seconds.

The reason light takes so long to escape from a star is that the core of a star is opaque. A photon emitted at the center has only a very short distance to travel before it gets scattered by one of the many electrons zipping around in the core. Scattering sends the photon off in some random direction, even back towards the center of the star instead of outward. This process happens millions of times a second. Sometimes the photon moves outwards, sometimes it moves inwards, with the photons going nowhere fast. Since the photons are being created in the center of the star, there are more photons there than in the outer points of the star. This means that, on average, there are more photons scattered outward than inward, and the light slowly diffuses out toward the surface of the star – which is really not a surface at all, at least not in the way we generally think of a surface. Finally, a photon will be scattered outward to a place where the star becomes transparent. At that point the photon is free to travel outward, and it escapes the star. This surface, called the photosphere, is really just a region with very thin gas high in the star’s atmosphere; there is nearly no “there” there, but the values of temperature and density in the gas above the photosphere cause the star to be transparent.

Stars – Lots of information about lives of of stars.

Interior Structure of Stars – Find out more about how a star keeps itself from blowing up and collapsing in on itself.