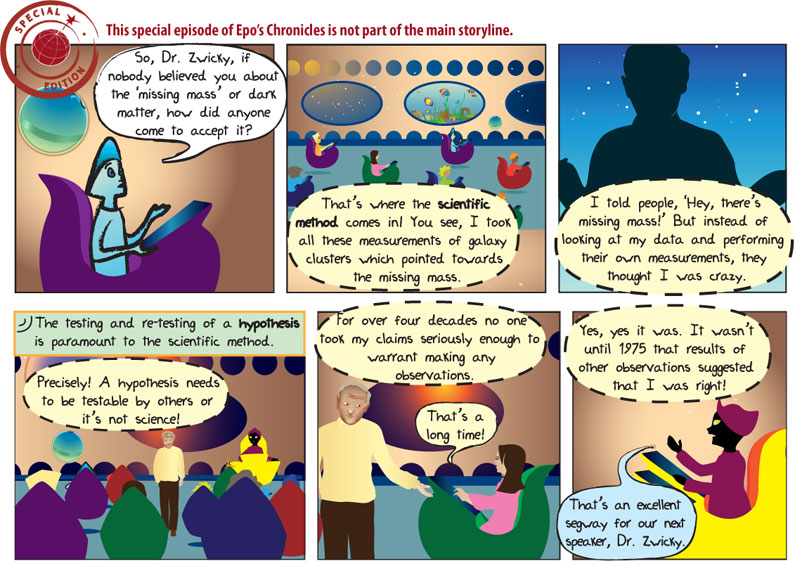 Panel 1.
Alkina: So wait, Dr. Zwicky, if nobody believed you about the ‘missing mass’ or dark matter, how did anyone come to accept it?

Panel 2.
Zwicky: That’s where the scientific method comes in! You see, I took all these measurements of galaxy clusters which pointed towards the missing mass.

Panel 3.
Zwicky: And I said to people, ‘Hey, there’s missing mass!’ But instead of looking at my data and then performing their own measurements on the clusters, they just thought I was crazy.

Panel 4.
Epo: The testing and re-testing of experiments is paramount to the scientific method.
Zwicky: Precisely! An experiment needs to be re-testable by others or it’s not science!

Panel 5.
Zwicky: For over four decades no one took my claims serious enough to warrant them doing the experiment themselves.
Vivian: That’s a long time!

Panel 6.
Zwicky: Yes, yes it was. It wasn’t until 1975 that the results of other experiments proved me right!
Teacher: That’s an excellent segway for our next speaker, Dr. Zwicky.

Scientific Method – A general systematic procedure for learning about the world. It consists of gathering information (data), and testing ideas through experiments and careful observations.

Steps of the Scientific Method – A nice flowchart outlining the scientific method.