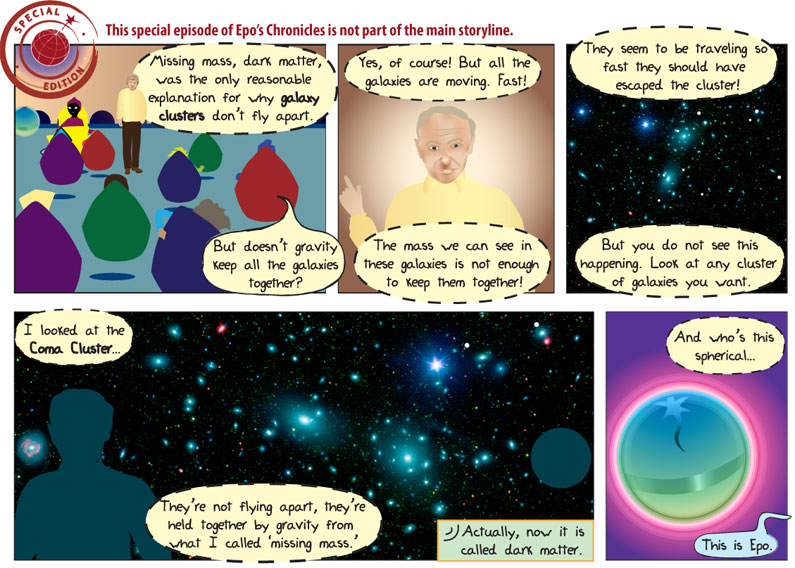 Panel 1.
Zwicky: Missing mass, dark matter, was the only reasonable explanation for why galaxy clusters don’t fly apart.
Klassen: But doesn’t gravity keep all the galaxies together?

Panel 2.
Zwicky: Yes, of course! But all the galaxies are moving. Fast! The mass we can see in these galaxies is not enough to keep them together!

Panel 3.
Zwicky: They seem to be traveling so fast they should have escaped the cluster! But you do not see this happening. Look at any cluster of galaxies you want.

Panel 4.
Zwicky: I looked at the Coma Cluster… They’re not flying apart, they’re held together by gravity from what I called ‘missing mass.’
Epo: Actually, now it is called dark matter.

Panel 5.
Zwicky: And who’s this spherical…
Teacher: This is Epo.

Galaxy Cluster – Thousands of nearby galaxies that are gravitationally bound together into a large group. Clusters contain at least as much mass in hot x-ray emitting gas as they do in galaxies. However, they are dominated by dark matter, which comprises 80% to 90% of their total mass.

Coma Cluster – A galaxy cluster located in the Coma Berenices constellation. The cluster contains over 1,000 galaxies and is 320 million light years from Earth.

Fritz Zwicky realized that the mass he could measure was not sufficient to provide the gravity needed to hold the cluster together; the Coma Cluster should have flown apart like so many spinning yo-yo’s with their strings cut. But it hadn’t flown apart. The galaxies were still orbiting each other. He calculated that in order to keep the Coma Cluster together there must be over 100 times more mass than is visible.

Zwicky called this extra source of gravity the “missing mass.” Because his result seemed so strange, no one at the time of Zwicky’s discovery believed him. While today the evidence for the missing mass, now commonly called “dark matter” is overwhelming, it isn’t difficult to understand why other scientists in the 1930s were skeptical of Zwicky’s claims. Unfortunately they were too skeptical and it would take decades before anyone took the idea of dark matter seriously.