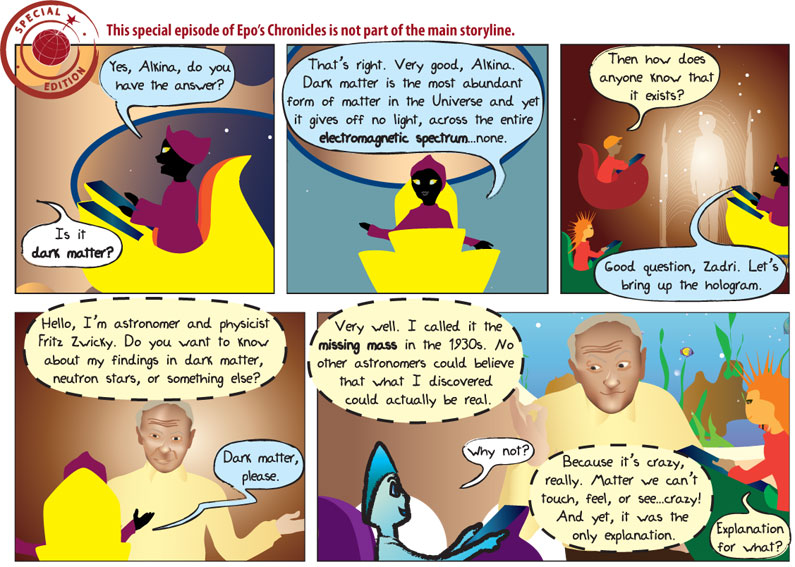 Panel 1.
Teacher: Yes, Alkina, do you have the answer?
Alkina: Is it dark matter?

Panel 2.
Teacher: That’s right. Very good, Alkina. Dark matter is the most abundant form of matter in the Universe and yet it gives off no light, not in any of the electromagnetic spectrum.

Panel 3.
Zadri: Then how does anyone know that it exists?
Teacher: Good question, Zadri. Let’s bring up the hologram.

Panel 4
[Hologram of Fritz Zwicky appears.]
Zwicky: Hello, I’m astronomer and thinker Fritz Zwicky. Do you want to know about my findings in dark matter, neutron stars, or something else?

Panel 5
Teacher: Dark matter, please.
Zwicky: Very well. You see, it was in the 1930s. And no other astronomers really could believe that what I discovered could actually be real.
Alkina: Why not?
Zwicky: Because it’s crazy, really. Matter we can’t touch, feel, or see…crazy! And yet, it was the only explanation.
Entoz: Explanation for what?

Dark matter – a hypothesized, exotic form of matter that does not emit nor absorb electromagnetic energy (light) and is, currently, only detectable by the gravitational influence it has on surrounding matter and energy.

Missing mass – The phrase used by Fritz Zwicky to refer to the material needed to gravitationally bind galaxy clusters. We now call this material dark matter.

The physicist and astronomer, Fritz Zwicky was a Swiss national born in Bulgaria in 1898. He immigrated to the United States in order to work at the California institute of Technology in 1925. He was instrumental in the development of the jet engine and was a staff member of both the Mount Wilson and Palomar Observatories.

Zwicky’s astronomical contributions are immense. He, along with other scientists, helped to gain a fundamental understanding of things like supernovas, neutron stars, gravitational lensing, and, of course, dark matter.