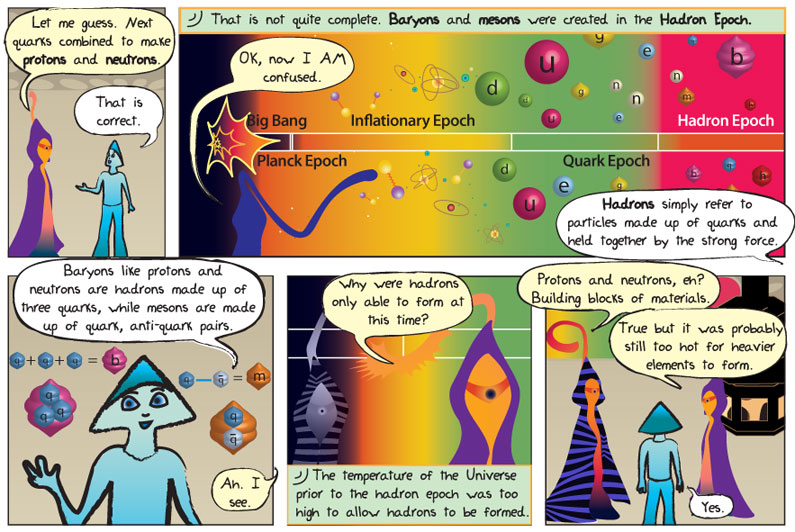 Panel 1
Worldship: Let me guess. Next quarks combined to make protons and neutrons.
Alkina: That is correct

Epo: That is not quite complete. Baryons and mesons were created in the Hadron Epoch.
Worldship: OK, now I am confused.
Alkina: Hadrons simply refer to particles made up of quarks and held together by the strong force.

Panel 3
Akina: Baryons like protons and neutrons are hadrons made up of three quarks, while mesons are made up of quark anti-quark pairs.
Worldship: Ah, I see.

Panel 4
Worldship: Why were hadrons able to form at this time?
Epo: The temperature of the Universe prior to the hadron epoch was too high too allow hadrons to be formed.

Panel 5
Worldship: Protons and neutrons, eh? Building blocks of materials. True but it was probably still too hot for heavier elements to form.
Alkina: Yes.

Proton – Protons are positively charged and are one of two types of particles found in the nuclei of atoms (the other being neutrons). The type of element (e.g. Hydrogen, Helium, etc.) is determined by the number of protons in its nucleus. For example, all hydrogen atoms have one proton in their nucleus, helium atoms have two protons, lithium atoms have three protons, and so on. A proton is made up of two Up quarks and one Down quark. Note: A hydrogen atom is made up of one proton, zero neutrons, and one electron.

Neutron – As their name implies, neutrons are neutral, that is, they don’t have an electric charge. Like protons, they are found in atomic nuclei. The number of neutrons determines the isotope of an element. For example, the most common isotope of hydrogen has a single proton in its nucleus, but another isotope of hydrogen, known as deuterium, has a single neutron accompanying the proton. A neutron is made up of two Down quarks and one Up quark.

Baryon – Baryons are particles made of three quarks. While three quarks can be combined to make many different types of particles, the most common baryons occurring naturally in the Universe are protons and neutrons.

Meson – Mesons are particles made up of a quark and an anti-quark pair. Because mesons are unstable they exist only for a short time before decaying into other particles. Mesons, like exotic baryons, are often created in particle accelerators.

Hadron – Baryons and mesons together are categorized as hadrons. These are particles made of quarks.

The fundamentals of matter and force – Particle Adventure explains hadrons, baryons and mesons.