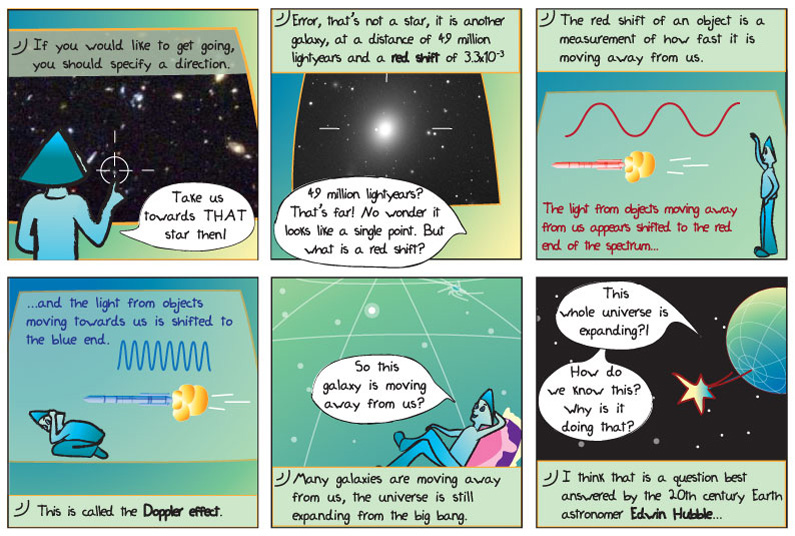 Panel 1.
Epo: If you would like to get going, you should specify a direction.
Alkina: Take us towards THAT star then!

Panel 4.
Epo: …and the light from objects moving towards us is shifted to the blue end. This is called the Doppler effect.

Panel 6.
Alkina: This whole universe is expanding?! How do we know this? Why is it doing that?
Epo: I think that is a question best answered by the 20th century Earth astronomer Edwin Hubble…

Doppler Effect – The Doppler Effect is the apparent change in the wavelength and frequency of sound or light depending on whether the source is moving towards or away from you. The faster you or the source is moving, the more profound the impact. You may have experienced an example of this with sound waves if you have ever heard a higher pitch sound from a car moving towards you, and a lower pitch noise when it is moving away:

Red Shift – This is the name given to the apparent change in the wavelength of light due to the Doppler Effect. Scientists know what the regular spectrum of a galaxy should look like (based on the spectrum of light emitted from known elements). If the light waves from a galaxy appears to have shifted towards higher frequency (blue), it is moving towards us, and if it has shifted towards a lower frequency (red), that means the object is moving away.

Edwin Hubble – An American astronomer, Hubble (November 20, 1889 – September 28, 1953) profoundly changed our understanding of the nature of the universe by demonstrating the existence of other galaxies beyond the Milky Way. The Hubble Space Telescope is named after Edwin Hubble.

The Universe is Expanding – Some history about the discovery of the expansion of the universe.

A cop pulls a man over to give him a ticket for running a red light.

“But Officer,” says the man. “At the speed I was driving, that red light looked greenish to me.”

“Fair enough,” says the officer. “In that case, I will have to give you a speeding ticket for driving waaaayyyyy over the posted speed limit.”