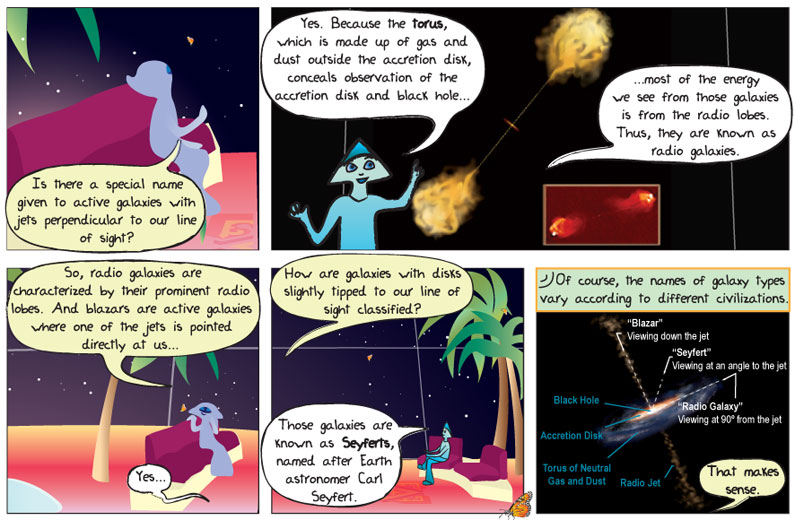 Panel 1.
Ceyla: Is there a special name given to active galaxies with jets perpendicular to our line of sight?

Panel 2.
Alkina: Yes. Because the torus, which is made up of gas and dust outside the accretion disk, conceals observation of the accretion disk and black hole, most of the energy we see from those galaxies is from the radio lobes. Thus, they are known as radio galaxies.

Panel 3.
Ceyla: So, radio galaxies are characterized by their prominent radio lobes. And blazers are active galaxies where one of the jets is pointed directly at us…
Alkina: Yes…

Panel 4.
Ceyla: How are galaxies with disks slightly tipped to our line of sight classified?
Alkina: Those galaxies are known as Seyferts, named after Earth astronomer Carl Seyfert.

Panel 5.
Epo: Of course, the names of galaxy types vary according to different civilizations.
Ceyla: That makes sense.

Torus – Gas and dust outside the accretion disk in an active galaxy. The term refers to the gas orbiting the central black hole in a torus, or donut-shaped region.

Seyfert galaxy – A spiral galaxy (named for astronomer Carl Seyfert) with an extremely bright nucleus that emits strong emission lines. In Type I Seyferts the inner disk is tipped to our line-of-sight, allowing us to see broad emission lines produced in regions where the gas moves very fast, 1000 km/s or more. In Type II Seyferts the angle is such that we do not see down to these fast-moving regions, so we see only relatively narrow emission lines, about 200 km/s in width.

Our understanding of the formation and evolution of galaxies has been a slow process, and active galaxies continue to play a pivotal part in that process. In the 1950s and 1960s astronomers first began to notice that a small fraction of galaxies, only about 1%, contain extremely bright nuclei that show evidence of extreme processes within. These galaxies are collectively called active galaxies. At first it seemed that all the different types of active galaxies, from radio galaxies to Seyferts to quasars (discussed in the next episode), etc., were all different sorts of objects. Over the past four decades this view has changed. It is now clear that they are all basically the same thing: within the cores of these galaxies there is a supermassive black hole that is feeding on nearby gas and emitting vast amounts of energy in the process. All large galaxies, including the Milky Way, contain massive black holes, but in 99% of them the black hole is not feeding, so the galaxies are not active. Nonetheless, it is clear that the formation of galaxies and the enormous black holes in their cores are intimately related.

By studying blazars, radio and Seyfert galaxies, as well as normal galaxies, scientists are expanding their understanding of the mechanisms by which galaxies have evolved over the history of the Universe.