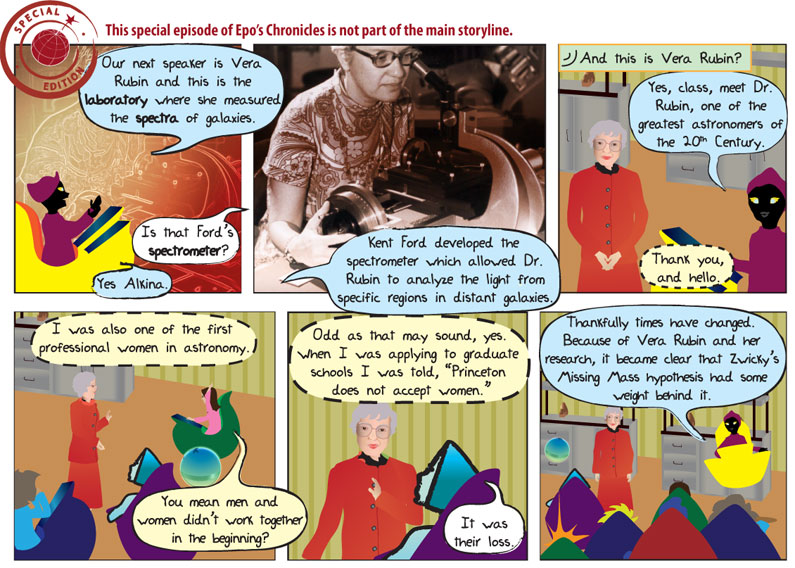 Panel 1.
[A hologram of Vera Rubin appears.]
Teacher: Our next speaker is Vera Rubin and this is the laboratory where she measured the spectra of galaxies.
Alkina: Is that Ford’s spectrometer, Ms. Iteede?
Teacher: Yes, very good Alkina.

Panel 3.
Epo: And this is Vera Rubin?
Teacher: Yes, class, meet Dr. Rubin. Vera Rubin is one of the greatest astronomers of the 20th Century.
Vera: Thank you, and hello.

Panel 4.
Vera: I was also one of the first professional women in astronomy.
Vivian: You mean men and women didn’t work together in the beginning?

Panel 5.
Vera: Odd as that may sound, yes. When I was applying to graduate schools I was told, “Princeton does not accept women.”
Alkina: It was their loss.

Panel 6.
Teacher: Thankfully times have changed. Because of Vera Rubin and her research, it became clear that Zwicky’s Missing Mass hypothesis had some weight behind it.

Laboratory – The location where a scientist conducts research. It is often, but not always, a room with specialized equipment and safety precautions. Often abbreviated as “lab.”

Spectrum – A graph showing the amount of light emitted by an object as a function of wavelength. The plural of spectrum is spectra.

Vera Rubin was born in 1928, received her bachelor’s degree in astronomy from Vassar College in Poughkeepsie, New York in 1948. She attended Cornell, in Ithaca, New York, and earned her Ph.D. from Georgetown University, in Washington D.C., in 1954.

She was hired by the Carnegie Institution in Washington as a research scientist in their astronomy program. At Carnegie, she began working with Kent Ford and his spectrometer.

W. Kent Ford developed the spectrometer that allowed measurements to be taken of different areas of distant galaxies. Before the development of this spectrometer, existing instruments could analyze only large areas of these galaxies at a time. Ford’s spectrometer had higher resolution, allowing astronomers to study smaller regions within the galaxies.

More on Vera Rubin will be in the next Special Episode of Epo’s Chronicles.