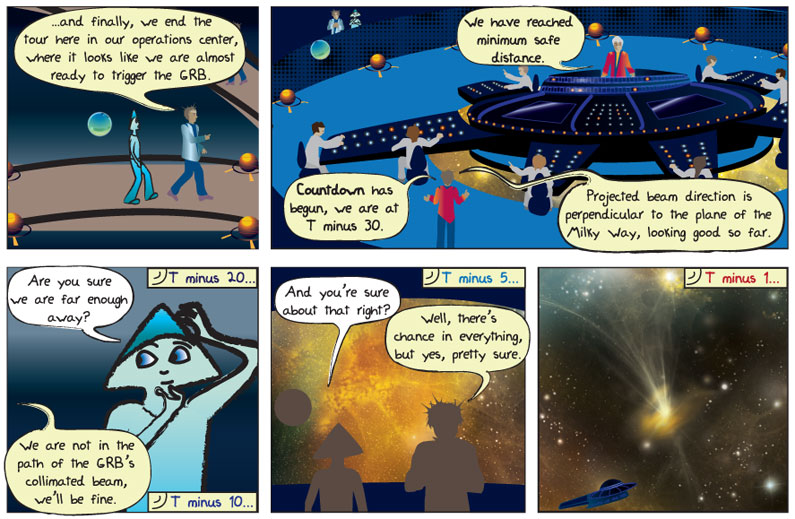 Panel 1.
Carl: …and finally, we end the tour here in our operations center, where it looks like we are almost ready to trigger the GRB.

Panel 2.
Captain: We have reached minimum safe distance.
Wosec: Countdown has begun, we are at T minus 30.

Panel 3.
[Over the speaker: T minus 20]
Wosec: Projected beam direction is perpendicular to the plane of the Milky Way, looking good so far.

Panel 4.
[Over the speaker: T minus 10]
Alkina: Are you sure we are far enough away?
Carl: We are not in the path of the GRB’s collimated beam, we’ll be fine.

Panel 5.
[Over the speaker: T minus 5]
Alkina: And you’re sure about that right?
Carl: Well, there’s chance in everything, but yes, pretty sure.

Panel 6.
[Over the speaker: T minus 1]
[Image of the exterior of the Burton ship can be seen along with binary star system off in the distance.]

Countdown – A series of time-sensitive procedures that are carried out leading up to the launch of a mission. While the last few seconds of the countdown are the most iconic, countdowns for spaceflight missions often range between 72 and 96 hours. T minus indicates the time remaining until launch, after launch, the clock starts counting up and mission time is measured as T plus.

Gamma-ray bursts, like many discoveries in science, were discovered quite by accident. Scientists never expected to find bursts of high energy radiation coming from the Universe. What they did fear they might find was gamma rays coming from the Earth in the form of nuclear weapons testing. In 1963 the United States and the Soviet Union signed the Partial Nuclear Test Ban Treaty to prohibit testing of weapons in the atmosphere, oceans, and space. Also in 1963, the United States launched the first of an eventual 5 pairs of Vela satellites. The satellites monitored Earth for telltale bursts of gamma rays, an indication that the Soviets had violated the treaty. In 1967, in a bit of scientific serendipity, the Vela satellites detected gamma rays from a non-terrestrial source, something that astronomers had never seen before and did not expect. The discovery was not made public until the mid 1970s due to the clandestine nature of the Vela program, so only the scientists working for the US Defense Department were aware of it at first. It took decades for scientists to accumulate enough data to begin to understand these sources. They were aided greatly by the construction and launch of satellites intended specifically to study “extraterrestrial” sources of high energy photons. It was not until the late 1990s that scientists were able to begin testing their ideas about the nature of gamma-ray bursts, such as hypernovae, collisions between neutron stars, or massive objects falling into black holes. Even now there are many questions remaining to be answered about gamma-ray bursts.

Special Edition: Vela – An episode of Epo’s Chronicles that highlights the Vela satellites.