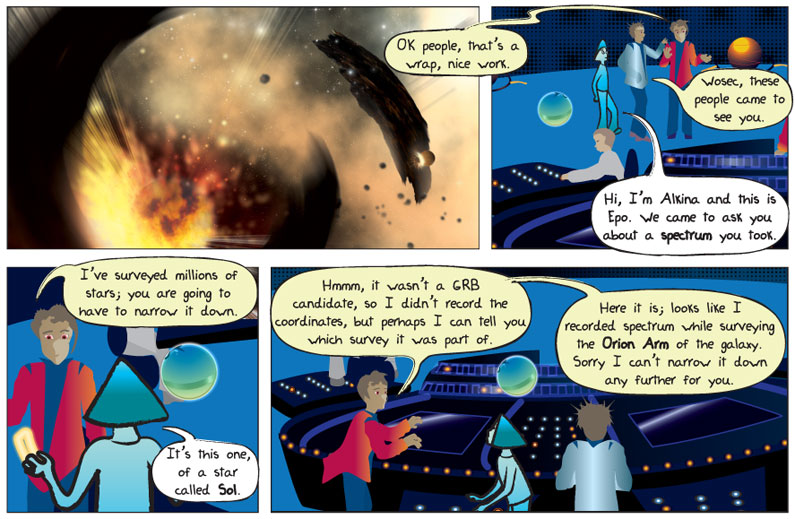 Panel 1.
[Image of a huge explosion.]

Panel 2.
Wosec: OK people, that’s a wrap, nice work.
Carl: Wosec, these people came to see you.
Alkina: Hi, I’m Alkina and this is Epo. We came to ask you about a spectrum you took.

Panel 3.
Wosec: I’ve surveyed millions of stars; you are going to have to narrow it down.
Alkina: It’s this one, of a star called Sol.

Panel 4.
Wosec: Hmmm, it wasn’t a GRB candidate, so I didn’t record the coordinates, but perhaps I can tell you which survey it was part of. Here it is; looks like I took recorded spectrum while surveying the Orion Arm of the galaxy. Sorry, I can’t narrow it down any further for you.

Spectrum – The distribution of how much light an object emits (its brightness) as a function of wavelength or frequency.

Orion Arm – Also known as the Orion-Cygnus arm and the Local Arm, is the minor spiral arm of the Milky Way galaxy, in which the Earth is located. The arm is about 10,000 lightyears in length and contains millions of stars.

Sol – This is one of the proper names for the Sun. Sol was the god of the sun in Roman mythology. It is from this root that words like “Solar” are derived.

Survey – In astronomy, a survey is a map that spans some region of the sky; some surveys even show the entire observable universe. Surveys can be taken in many different wavelengths, producing very different images of the Universe.

If someone were to ask you where the Earth is located, what would you tell them? You might say it’s the 3rd planet from the Sun, but where is the Sun located? You could tell them that it’s in the Milky Way galaxy, but if you wanted to narrow it down just a bit more than that, you could tell them that it’s in the Orion Arm of the Galaxy. The Orion Arm contains the stars that form the constellation Orion, and the Orion Nebula. It also contains all of our closest neighbors, like Siruis, Alpha Centauri, Barnard’s Star, and Wolf 359. Other arms of the Milky Way include Perseus, Sagittarius, Norma, and Scutum-Crux.

Surveying the Universe is a big job, and one that humans on Earth have been doing since people looked up at night. In ancient times, people could only make visible light surveys of the sky. But today scientists have a multitude of tools to use. They can survey the Universe in many wavelengths, not just the visible ones. When looking for the most energetic events in the Universe, scientists look at the very highest-energy waveband of the electromagnetic spectrum: gamma rays. The most recent gamma-ray survey satellite is Fermi, a collaboration between NASA and Department of Energy in the United States and agencies in France, Germany, Italy, Japan and Sweden. Fermi is named after famed Italian physicist Enrico Fermi. It is the most sensitive gamma-ray telescope ever built and allows astronomers to learn about black holes, gamma-ray bursts and even dark matter.

Flyout animation from Earth to outside the Milky Way galaxy.