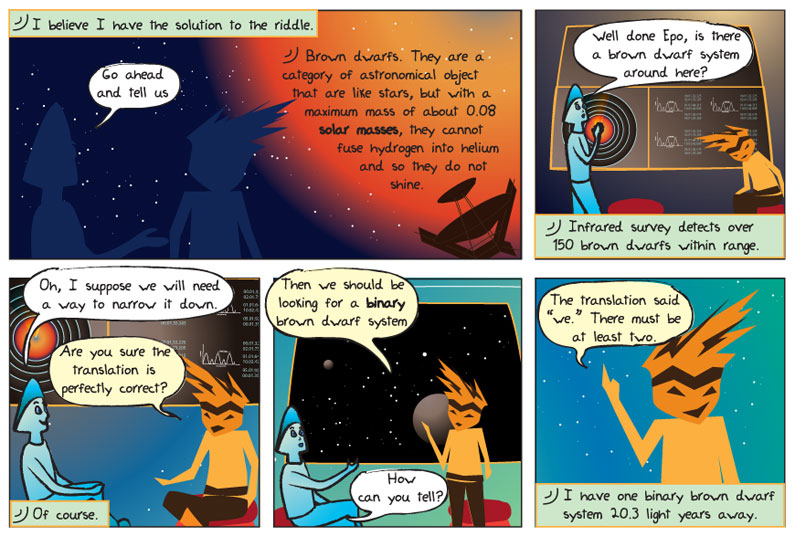 Epo: I believe I have the solution to the riddle.
Alkina: Go ahead and tell us.
Epo: Brown dwarfs. They are a category of astronomical objects that are like stars but with a maximum density of 0.08 solar masses, they cannot fuse hydrogen into helium and so they do not shine.

Alkina: Oh, I suppose we will need a way to narrow it down.
Beggrin: Are you sure the translation is perfectly correct?
Epo: Of course.

Panel 4
Beggrin: Then we should be looking for a binary brown dwarf system.
Alkina: How can you tell?

Panel 5
Beggrin: The translation said “we”. There must be at least two.
Epo: I have one binary brown dwarf system 20.3 lightyears away.

Infrared – The band of the Electromagnetic Spectrum with wavelengths in the micrometer range.

Brown dwarfs are a class of astronomical objects that scientists have recently been studying in detail. They have masses from around 12 to 80 times the mass of Jupiter, and are therefore intermediate in size between very large planets and very small stars.However, brown dwarfs do not have enough mass to generate internal temperatures high enough to spark nuclear fusion, which is what makes a star shine. Because they have a lot of mass, they contract gravitationally, producing heat that is emitted in the infrared part of the spectrum. Infrared is the region of the electromagnetic spectrum just below visible light in terms of energy, and objects that are somewhat hot (including mammals like us) give off infrared.