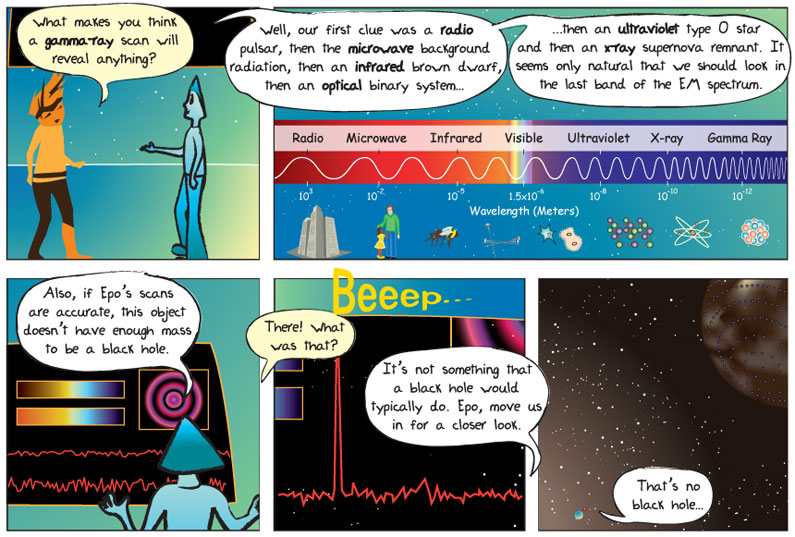 Panel 1
Beggrin: What makes you think a gamma ray scan will reveal anything?
Alkina: Well, our first clue was a radio pulsar, then the microwave background radiation, then an infrared brown dwarf, then an optical binary system…

Panel 2
Alkina: …then an ultraviolet type-O star and then an X-ray supernova remnant. It seems only natural that we should look in the last band of  the EM spectrum.

Panel 3
Alkina: Also, if Epo’s scans are accurate, this object doesn’t have enough mass to be a black hole.

Panel 4
Beeeep
Beggrin: There! What was that?
Alkina: It’s not something that a black hole would typically do. Epo, move us in for a closer look.

Radio – is the name given to the lowest energy region of the electromagnetic spectrum. Radio waves have wavelengths of meters (m), or even kilometers (km, 103m).

Microwave – The energy of microwaves is a bit higher than radio waves. Their wavelengths are therefore shorter, and are typically measured in centimeters (cm or 10-2m).

Infrared – This band of the electromagnetic spectrum has wavelengths in the micron (μm, 10-6m) range. They are correspondingly more energetic than microwaves and radio.

Optical – The band of energy we can see with our eyes. It is intermediate in terms of energy and wavelength, with wavelengths somewhat shorter than infrared (approximately 400 – 750 nm) and energies somewhat higher.

X-ray – high energy electromagnetic radiation. X-rays are more energetic than ultraviolet light but less energetic than gamma-rays. Because of their high energies and short wavelengths, x-rays can easily pass through “soft” materials and can be used to image the insides of things, like the human body. Wavelengths of x-rays are shorter than about a nanometer.

Alkina had a couple of reasons to be doubtful of the “black hole” in front of her. First of all, they had not yet made it to the end of the Electromagnetic spectrum, since gamma rays are the highest energy band of the EM spectrum. The second clue she had (in Episode 79), is that the invisible object only had a mass of 1.2 solar masses, which is less than the 3 solar masses that scientists have calculated is the lower limit for an object being massive enough to collapse into a black hole. An object with 1.2 solar masses is also too light to be a neutron star, which require at least 1.4 solar masses to form. Can you imagine a reason an object like a star would not give off any light that we can see?

Because of the very large range of energies/wavelengths covered by the electromagnetic spectrum, scientists generally use different terminology to talk about the different bands. For instance, radio has very long wavelengths, so scientists generally describe different radio waves by the frequency of the wave (how many waves pass by every second). For radio this is between a few thousand and a few million waves every second. However, this sort of description does not work well for microwaves to UV; their frequencies are very high (more than 11 trillion waves per second), so scientists usually talk about the wavelength of these types of radiation. Finally, x-rays and gamma-rays have enormous frequencies and tiny wavelengths. Scientists usually describe them by their energies. X-rays have thousands of times the energy of visible light, and gamma-rays have many millions, billions, trillion, or even more energy than visible light. This gets a little bit confusing, but it’s really just a way of describing different kinds of electromagnetic waves with vastly different energies/frequencies/wavelengths.