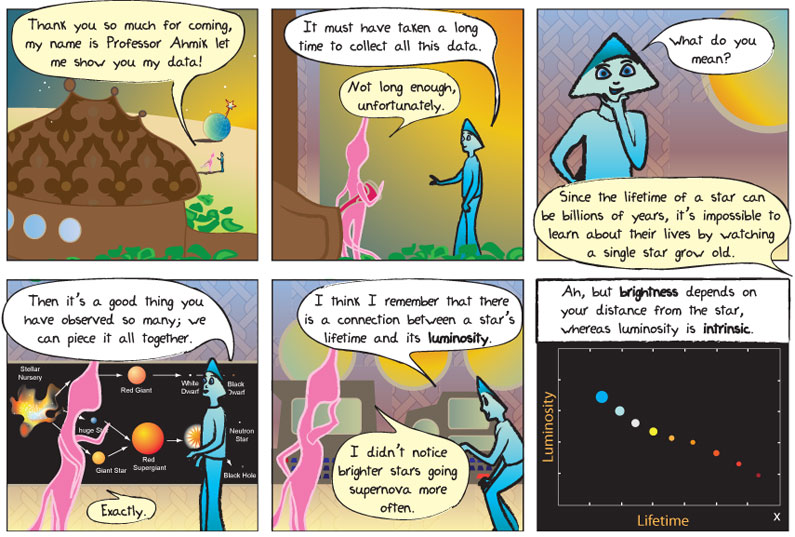 Panel 1.
Professor: Thank you so much for coming, my name is Professor Ahmix let me show you my data!

Panel 2.
Alkina: It must have taken a long time to collect all this data.
Professor Ahmix: Not long enough, unfortunately.

Panel 3.
Alkina: What do you mean?
Professor Ahmix: Since the lifetime of a star can be billions of years, it’s impossible to learn about their lives by watching a single star grow old.

Panel 4.
Alkina: Then it’s a good thing you have observed so many; we can piece it all together.
Professor Ahmix: Exactly.

Panel 5.
Alkina: I think I remember that there is a connection between a star’s lifetime and its luminosity.
Professor Ahmix: I didn’t notice brighter starts going supernova more often.

Panel 6.
Alkina: Ah, but brightness depends on your distance from the star, whereas luminosity is intrinsic.

Luminosity – The amount of energy an object, like a star, radiates per unit time. This is usually measured in watts, just like a light bulb.

Brightness – The amount of light an observer sees from an object like a star. Brightness is measured in watts per distance squared (W/d2).

Intrinsic – In science, the intrinsic value or property of an object does not change based on outside factors. For example, your mass, or the amount of stuff of which you are made, does not change whether you are standing on Earth or the Moon. Mass is an intrinsic property of yours. Your weight, which is related to your mass by the force of gravity will be different whether you measure it on Earth or on the Moon.

It may seem that a star that puts out more energy (is more luminous) would appear brighter in the sky. However, stars exist at widely varying distances from their observers. Hence, a very luminous star at a great distance might have a lower brightness than a much dimmer but closer star.

The Relation Between Brightness and Luminosity – How is brightness different from luminosity? This link has the detailed answer.