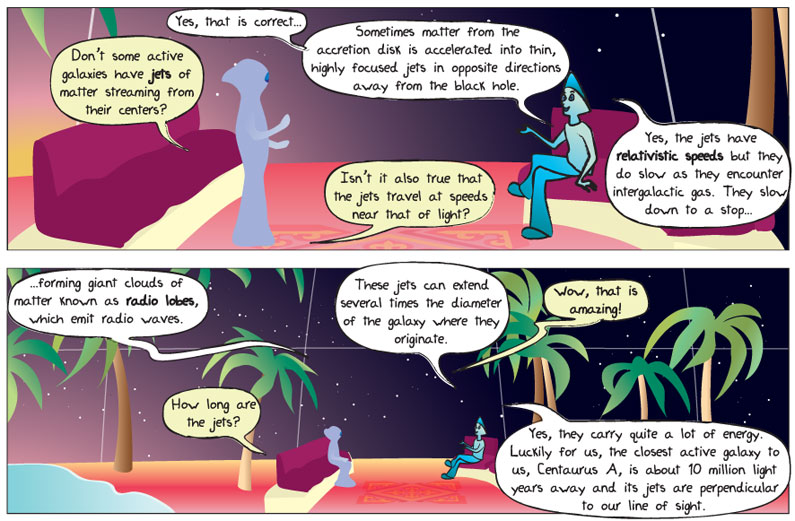 Panel 1.
Ceyla: Don’t some active galaxies have jets of matter streaming from their centers?
Alkina: Yes, that is correct… Sometimes matter from the accretion disk is accelerated into thin, highly focused jets in opposite directions away from the black hole.

Ceyla: Isn’t it also true that the jets travel at speeds near that of light?
Alkina: Yes, the jets have relativistic speeds but they do slow as they encounter intergalactic gas they slow down to a stop…

Alkina: These jets can extend several hundreds of thousands of light years, several times the diameter of the galaxy where they originate.
Ceyal: Wow, that is amazing!

Alkina: Yes, it is. They do carry quite a lot of energy and luckily for us, the closest active galaxy to us, Centaurus A, is about 10 million light years away and its jets are perpendicular to our line of sight.

(Active galactic) Jets – thin, highly focused beams of matter and energy emitted from the nuclei of some active galaxies. Jets can be hundreds of thousands of light years long.

Relativistic speed – a speed near to the speed of light. At such high speeds objects show effects predicted by Einstein’s Theory of Special Relativity.

Radio lobe – A large glowing cloud of matter located at the ends of the jets in some active galaxies. Lobes are formed when the matter in the jet is slowed by collisions with intergalactic material. The lobes emit most strongly in the radio part of the spectrum, but they also emit at other wavelengths.

The mechanism that creates jets in active galaxies is not well understood. One possibility is that as charged particles in the accretion disk orbit the black hole they create intense magnetic fields which then accelerate other charged particles in the vicinity of the disk. These accelerated particles flow outward in oppositely directed tightly collimated beams perpendicular to the disk plane. They generally move at speeds close to the speed of light. Eventually, the particles slow due to collisions with intergalactic gas (gas in the space between galaxies). The slowed particles, which are still relativistic but no longer collimated (focused), create giant clouds of matter that radiate strongly at radio wavelengths in a process called synchrotron emission.

Recently, the Fermi Gamma-ray Space Telescope detected gamma rays from the giant clouds at the ends of jets emanating from Centaurus A, which you can read about by following the link below.

Black Hole Accretion Disk – An animation that provides a cutaway of a black hole’s accretion disk, allowing the viewer to see inside.