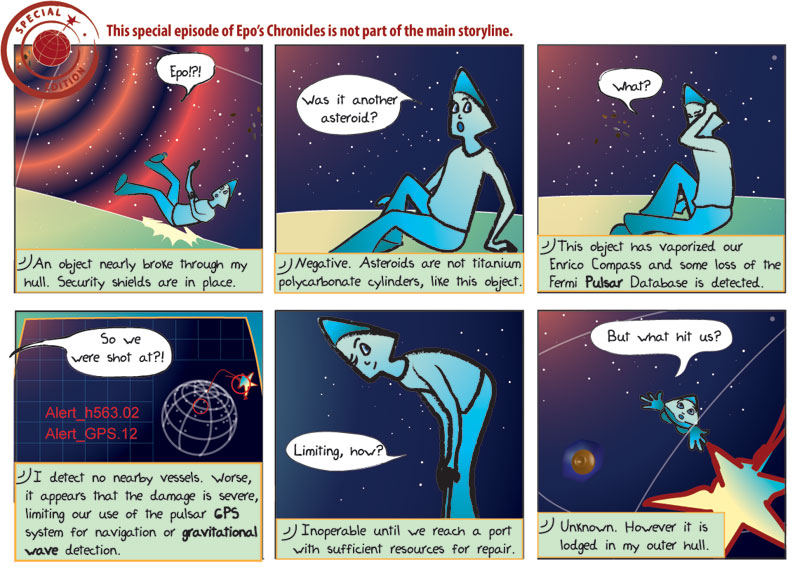 Pulsar – A type of spinning neutron star that emits a beam of light like a lighthouse. Since it only points at us some of the time, it looks to us like it is pulsing on and off, hence the name pulsar.

Gravitational Wave – Objects that undergo a change of mass, and/or have asymmetrical rotations are hypothesized to affect spacetime in such a way as to generate ripples in spacetime. The ripples, or gravitational waves, are produced when the objects change their physical configuration, i.e. their size, shape or extent.

Pulsars, global positioning systems, and gravitational waves, what do they have in common?

According to the Theory of General Relativity, objects with mass will cause ripples in spacetime when they change their configuration/shape. The ripples are somewhat similar to the ones caused by dropping a stone into a lake; they are called gravitational waves. If an object is massive enough, comparable to or greater than the mass of a star, the ripples might be detectable. The problem currently facing scientists is the need for exceptionally sensitive instruments to detect the waves. This is where pulsars and the Fermi Gamma-ray Space Telescope come in. For 30 years only about 60 millisecond pulsars were known, but in the first year of Fermi’s operation it helped radio astronomers discover over 15 more. This means that Fermi needed only a single year to do what previous instruments needed seven years to accomplish.

Pulsars spin and emit a beam of light while doing so, somewhat like a lighthouse. If a pulsar beam sweeps past us it looks like a flashing light. Pulsars also spin at a very regular rate, meaning the time between the flashes is very nearly constant. Some pulsars flash every few seconds, others many times in one second. However, if a gravitational wave passes between us and a pulsar, we will notice a time shift in the arrival of successive pulses. This effect is one way scientists will try to detect gravitational waves.

If we are able to find enough fast-spinning (millisecond) pulsars then we could “watch” a gravitational wave move through space as it first passes over one pulsar, then another, and so on in the direction of its travel. The pulsars would act as a galactic GPS for locating gravitational waves. Once we know which way a gravitational wave is traveling, we can look backwards and find out from whence it came. With all the new pulsars that have been discovered, Fermi has helped to increase the possibility that pulsars may someday be used to detect gravitational waves.

Galactic GPS – Official press release from the Fermi mission describing the potential use of pulsars as part of a galactic GPS system.