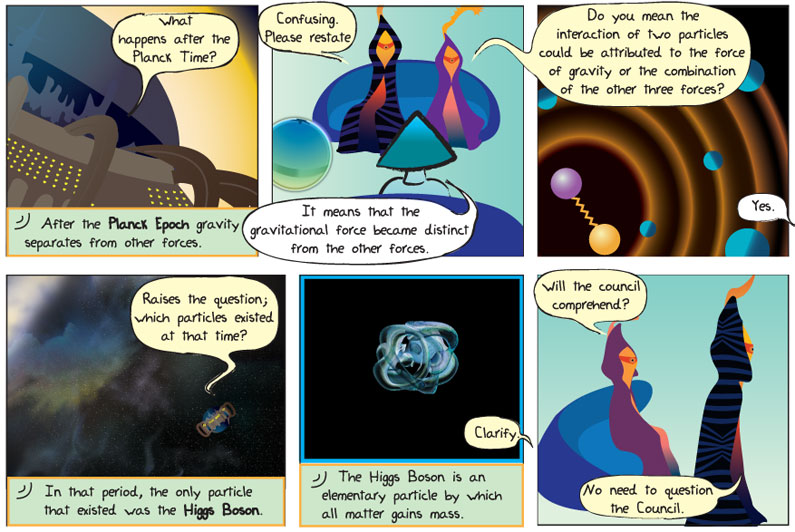 Panel 2
Worldship: Confusing. Please restate.
Alkina: It means that the gravitational force became distinct from the other forces.

Panel 3
Worldship: Do you mean the interaction of two particles could be attributed to the force of gravity or the combination of the other three forces?
Alkina: Yes.

Panel 4
Worldship: Raises the question; which particles existed at that time?
Epo: In that period, the only particle that existed was the Higgs Boson.

Panel 5
Worldship: Clarify.
Epo: The Higgs Boson is an elementary particle by which all matter gains mass.

Panel 6
Worldship: Will the council comprehend? No need to question the council.

Planck Epoch – refers to the period from the beginning of the Universe to the Planck Time. This epoch only lasted 10-43 seconds.

Higgs Boson – According to the Standard Model of Particle Physics (the most complete and accurate model we have of elementary particles), the Higgs boson is responsible for giving the other particles mass.

The theory behind the unification of the electromagnetic and weak forces, termed electroweak unification, was a great success of particle physics in the 1960s. However, it wasn’t without its problems. As successful as it was, the theory required that all particles be massless. In order to reconcile this discrepancy Peter Higgs postulated, or predicted, the existence of a particle, the Higgs Boson, by which all matter gained mass.