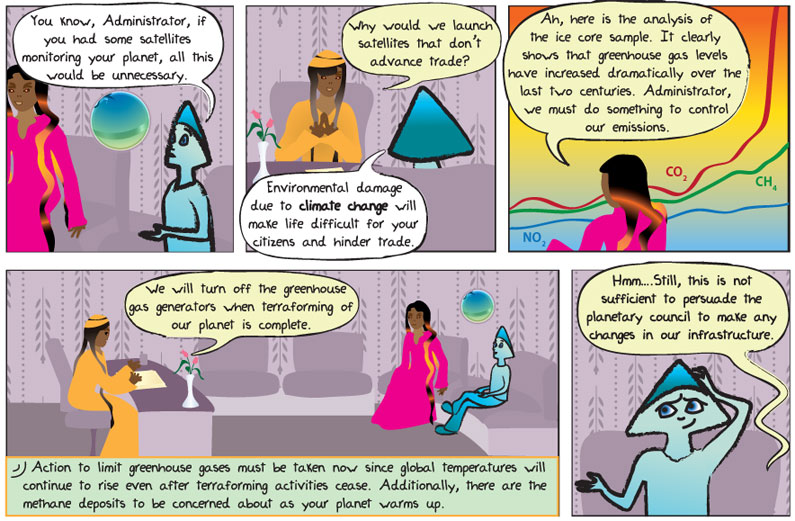 Panel 1.
Alkina: You know, Administrator, if you had some satellites monitoring your planet, all this would be unnecessary.

Panel 2.
Administrator: Why would we launch satellites that don’t advance trade?
Alkina: Environmental damage due to climate change will make life difficult for your citizens and hinder trade.

Panel 3.
Professor 2: Ah, here is the analysis of the ice core sample. It clearly shows that greenhouse gas levels have increased dramatically over the last two centuries. Administrator, we must do something to control our emissions.

Panel 4.
Administrator: We will turn off the greenhouse gas generators when terraforming of our planet is complete.
Epo: Action to limit greenhouse gases must be taken now since global temperatures will continue to rise even after terraforming activities cease. Additionally, there are the methane deposits to be concerned about as your planet warms up.

Panel 5.
Administrator: Hmm…. Still, this is not sufficient to persuade the planetary council to make any changes in our infrastructure.

Climate Change – is the change in a planet’s weather patterns over long periods of time ranging from decades to hundreds of thousands of years.

Epo claims that the planet’s temperature will continue to rise even after the inhabitants of the planet have turned off the greenhouse gas generators. The reason is that even when greenhouse gases are no longer being generated, the heat trapping gases already in the atmosphere take some time to dissipate.

Different gases, depending on their chemical properties, take different times to disperse and come into balance with the natural amounts of those gases. For example, it would take over 200 years for most of the anthropogenic, i.e. man made, carbon dioxide (CO2) to dissipate. Methane (CH4), which is at least 20 times more powerful at trapping heat in the atmosphere than CO2, will last up to 12 years. Most of the atmospheric nitrous oxide (N2O), about 300 times more potent than CO2, released today will last about 110 years.

The processes that remove these gases from the atmosphere also vary. Carbon dioxide, for example, is used by plants during photosynthesis to convert it into energy that helps the plant grow. The ocean also absorbs some of the atmospheric CO2. Methane reacts with other molecules in the atmosphere to cease being a greenhouse gas while nitrous oxide is broken apart by sunlight.